A late addition to the skier retirement series is German Claudia Nystad (before she married she raced under the name Claudia Kuenzel; FIS hyphenates her name, so I will too).

Kuenzel-Nystad has quite a few Olympic and World Championship medals, although most of them were in relays.  She has 8 medals (all gold and silver) in both sprint and distance relays.  Additionally, she has a silver medal from the individual sprint in the Turin Olympics and another silver from the individual sprint in the 2003 Val di Fiemme World Championships.

I counted 26 podium results in various major events (WC, OWG and WSC).  That includes distance and sprint and Tour de Ski races.  Sixteen of these were in distance races and another ten were sprints.  A few of the distance races were actually quite short, being prologue events at Tour de Ski or other stage race format events.

Let’s take a look at her distance results first: 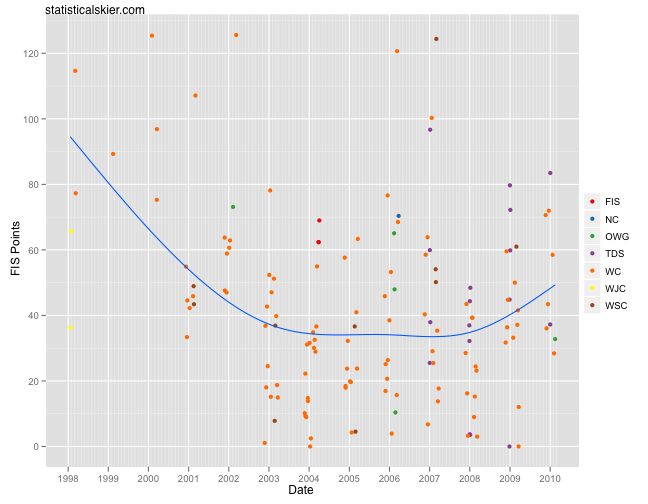 Her better World Junior results (yellow dots) was a second place in the 5k freestyle.  Between these and 2001 Kuenzel-Nystad only occasionally raced World Cups.  After a few introductory seasons, she was a rather consistent top skier for around six seasons, before her results tailed off somewhat this past year.

I’d call her somewhat unlucky that her career only really spanned one Olympics during her “peak” years.  If you shift her career by 2-3 years in either direction, she might have had a better shot at some good results at another Olympics.

Let’s see if she had a technique preference in distance events: 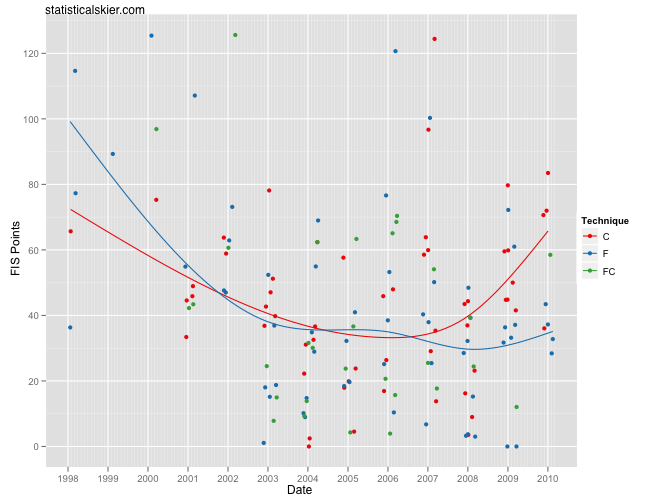 Certainly she skated better towards the end of her career, but things were at least somewhat even through the bulk of her career.  Her 2002-2003 season is interesting for the noticeable separation between her skating and classic races, with the exception of two slower skating races.

Kuenzel-Nystad is actually known as an excellent sprinter: 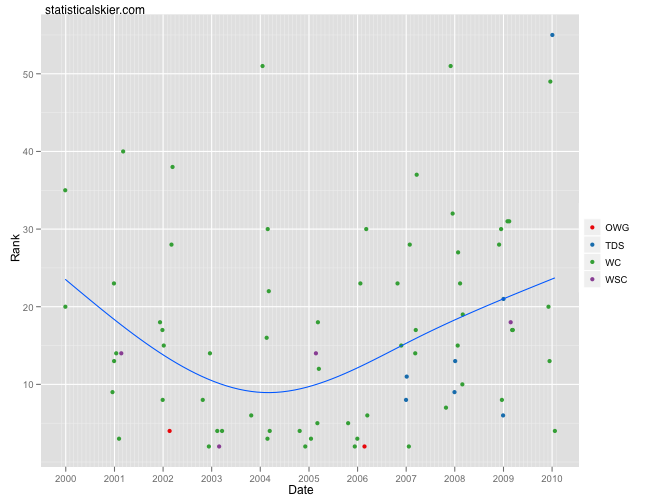 As you can see, she was a reliable bet to qualify.  She had a strong sequence of seasons from 2003 to perhaps 2007, but then things tailed off somewhat.

Let’s see if she had a favorite technique for sprinting: 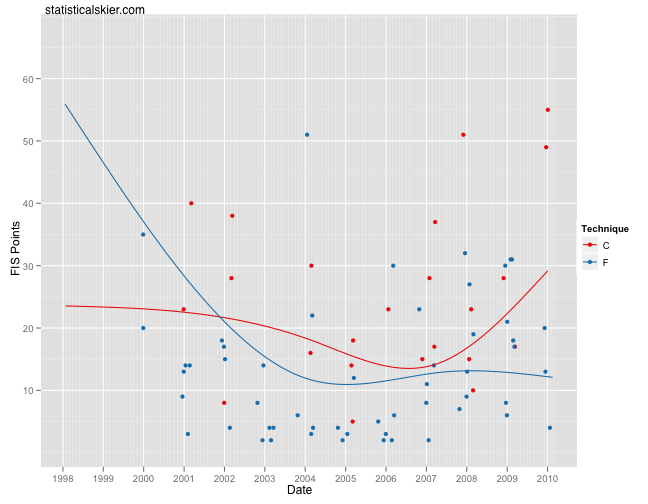 This seems like a clear win for skating.  The sudden uptick in the trend line for classic sprinting in the last few seasons is probably a bit unfair, being based only on 3 bad races.  Still, her top ten results were nearly all skating.

I’ll close by noting that the FasterSkier article I link to above observes that Kuenzel-Nystad actually auctioned off her 2002 distance relay Olympic gold medal with the proceeds going to a German charity that helps abused children, Hansel and Gretel.  Cool stuff…

For Northug and Norway, Poker is Politics