The career retrospectives took an unintentional week off last Friday due my being distracted by the Tour.

Milan who?  Again, a skier who’s name I should probably know, but did not.  He’s a Czech skier who’d been competing internationally since around 2000.

Let’s have a look at his distance results: 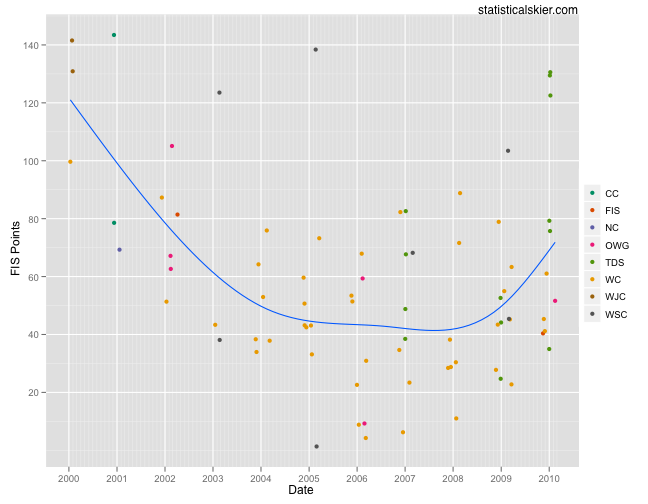 Sperl’s breakthrough race in 2005 at World Championships seemed to lead to some more good races over the following 3 seasons.  Typically, though, his results varied quite a lot.  Like a lot of retiring skiers, though, his best results have been getting worse recently.

Sperl is another skier where I want to highlight their World Junior results (brown dots, upper left).  In his case, they were not good: 43rd and 45th.  Nothing to write home about, yet he went on to compete on the World Cup circuit and do fairly well at times.  Yet another reason to be cautious about reading too much into a skier’s results as a junior. 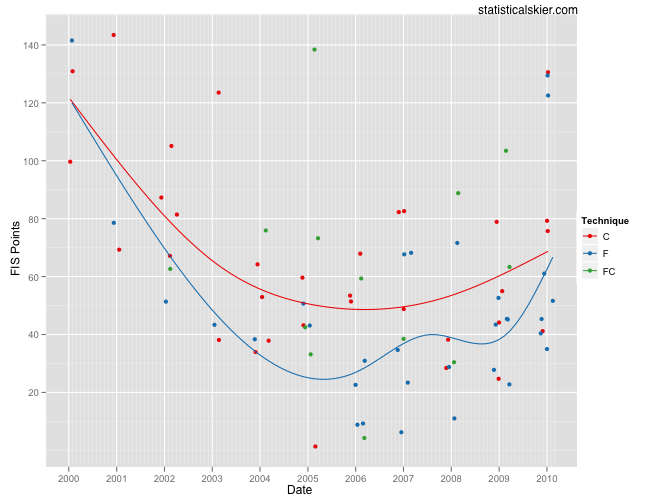 This is kind of interesting.  Sperl’s big race, the 6th place finish at WSC’s in 2005, was a classic race.  But in general, his best races were nearly always skating.  I wonder if there was anything unusual about that 50km classic in 2005?  Weather, waxing…?  Then again, maybe he just had a good day.

Once again I’m going to omit looking at his results by distance (once again, they aren’t very interesting).  His sprinting career wasn’t exactly prolific.  I found only around 12 races, in none which did he qualify for the elimination rounds.  However, his preference for skating persisted, as nearly all the sprint races that he did do were skating.

We’re almost to the end of the retiring cross country skiers (at least those that I know of!), but do not fear, this series will continue with biathletes!