Thanks to NordicXplained I’ve been alerted to several more athletes retiring after the 2009-2010 season.  These next three may be somewhat less famous than the other skiers I profiled, but that doesn’t make them less important or less interesting!  For instance…

…Swiss skier Reto Burgermeister, who has one of the coolest names I’ve ever seen, and that’s coming from someone with an unusual name myself.  Burgermeister has reached the podium two times in his career: a 30km pursuit in Germany in 2004 and a 15km classic race in 2003, also in Germany.

His Wikipedia page appears to be inaccurate, claiming that he “…retired in 2007 as he was since 2002 very unsuccessful. [sic]“.  I have World Cup races for him through March of 2010.  Maybe he retired and then un-retired?  Lots of people do that these days…

Let’s look at his distance results: 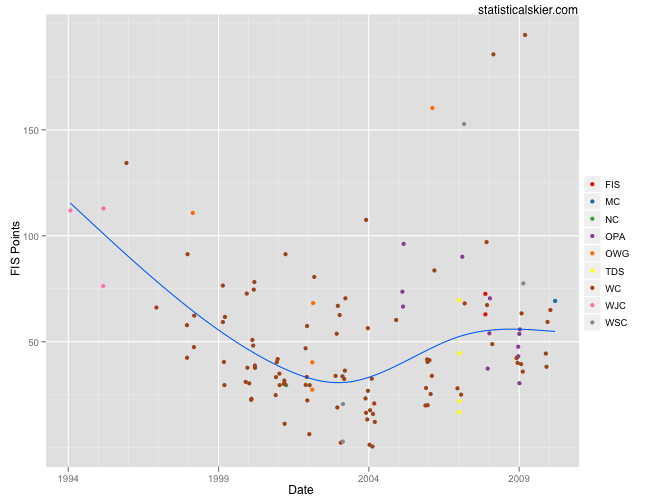 That’s a long career and lots of WC races.  Without a doubt, 2003-2004 was his best season.  The wiki author is kind of right that Burgermeister has had less success more recently, but I think “very unsuccessful” might be a bit harsh.  His bad races certainly got really bad (>150 FIS points) and his top races declined from below 10 points to near 50.

But Burgermeister was around 29 or so in 2004.  Some skiers just continue hammering away past age 30, but many more do not.  And his results at the end of his career aren’t really that different from his results from 1999-2000.

Let’s see if he had a favorite technique: 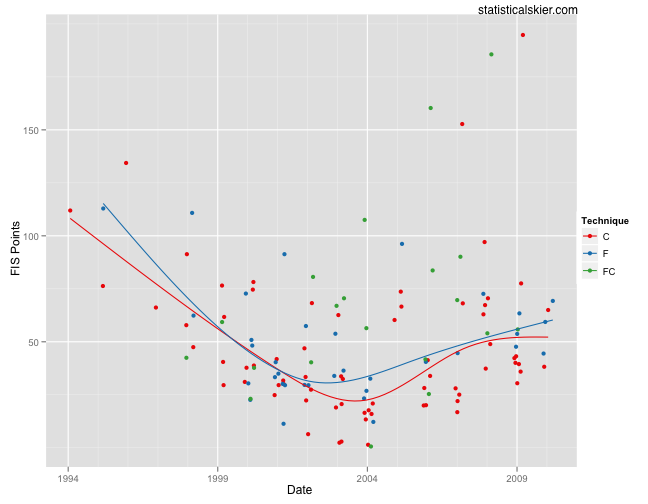 The trend lines suggest a (very) slight edge for classic, though I think that underplays the difference somewhat.  Remember the trend lines track the average, but Burgermeister’s best races were nearly all classic, particularly later in his career. 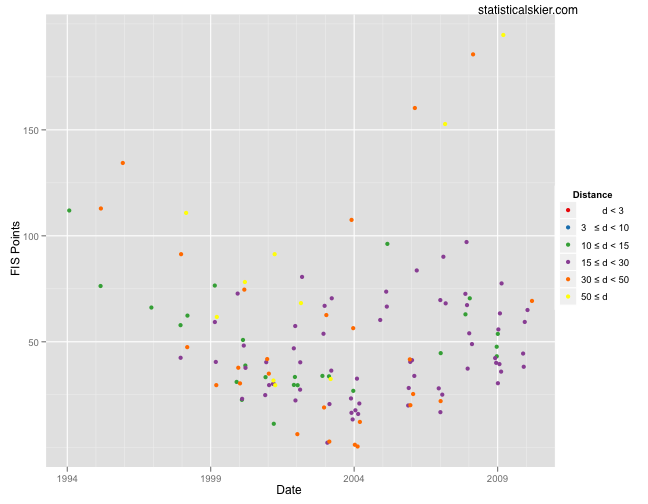 I’m going to forego the sprint results plots for Burgermeister, because, well, there are only 8 data points.  And that would just make for a silly looking graph.  So let’s just say that sprinting wasn’t Burgermeister’s cup of tea, and leave it at that.

Thanks for the memories, Reto!  I wish I could retire in Switzerland…