Just recently the guys at FasterSkier and the Nordic Commentary Project got together for a podcast, where they discussed a range of topics in international ski racing.  One topic that they touched upon was the fact that cross country skiing has an ever increasing number of race formats.

I listened with interest to that section, since I had recently commented on this situation as well.

The general feeling in the FasterSkier podcast appeared to be that the large number of different types of events isn’t a huge concern.  At least, they suggested that athletes probably aren’t that concerned about it.  If you go back and look at my post on the subject and the graphs I made (reproduced below) I think you’ll surmise that I consider it a pretty big problem. 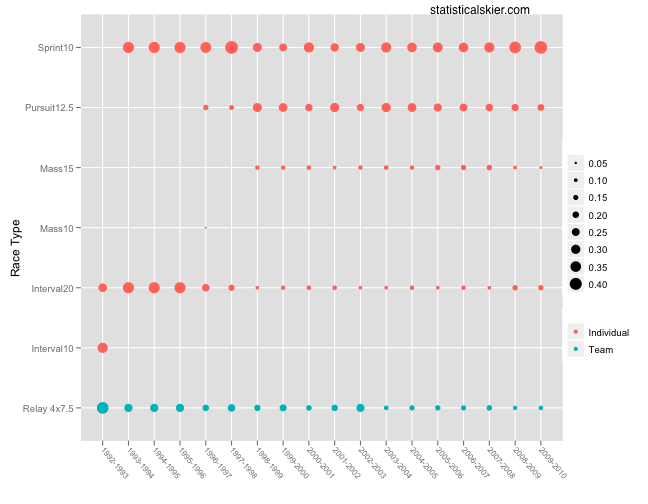 I didn’t really expand on my complaint in my original post, beyond pointing out that the XC schedule (top graph) is way more fragmented than the biathlon schedule (bottom graph).  This seems like a good time to explain myself more fully.

My concerns about the fragmented nature of the XC schedule can be broken down into two categories: personal nostalgia and growing the sport in North America.

The personal aspect stems from the fact that the sport of XC ski racing is becoming increasingly foreign to me.  Indeed, part of my motivation for starting this blog was to reconnect with the sport.  I raced competitively for much of my life, until I graduated from college.  Since around 2001-2002, I have participated in one ski race.  This means that a large number of the current XC race formats I have no direct experience with at all.  Sprints?  I did one in college.  Continuous pursuits?  Zero.  Same day pursuits?  Never.  Stage races?  Nope!  Ski switching?  Nadda.  Team sprints?  Not once.

Sadly, I’ve found that this rather strongly impacts my emotional connection to the sport as a spectator.  I don’t dislike sprinting, continuous pursuits, etc.  They simply don’t resonate with me nearly as much as a good old interval start race.  Obviously, this is simply a personal reaction (and of course is partially my own fault for not being more involved in the sport) and doesn’t mean much for the sport as a whole.

On the other hand, the large number of different race formats (and the rate at which they’ve been introduced) does concern me regarding our ability to sell the sport to North American fans.  The Olympics is really the only opportunity for our sport to get a real spotlight in our domestic media and they are spaced pretty far apart.  If the event line up changes dramatically every Olympics (as it has for the past three), you have to educate the general public anew each time the Olympics roll around.  As they say in politics, if you’re explaining, you’re losing.

I suppose you could argue that I’m selling the North American sports fan short, that figuring out the differences between XC events isn’t that hard.  Still, in a sport as marginal as ours, it seems insane to me to put up even the smallest hurdles to the general public.  Also, I’m not arguing that this one problem will single handedly doom XC skiing from growing in North America, just that it’s probably making it harder than necessary.

Finally, I’d be curious as to whether my perspective is really unique as a North American.  It could be that the changes in race formats don’t bother Europeans nearly as much given their more extensive history and media exposure with the sport.