This is the head to head matchup that was runner up in my recent reader poll.  No reason not to keep everyone happy by tackling this pair next!

Here’s the graph of their head to head distance race results: 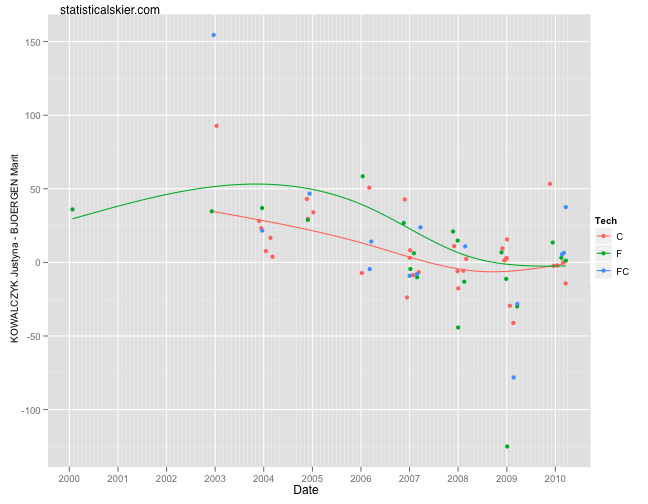 Marit was clearly the stronger skier earlier in their careers, although we should keep in mind that she is around three years older than Justyna and that age difference will be more important when they are both younger.  Since then things have evened up considerably, with Justyna actually having the better of the matchup in the 2008-2009 season.  Marit turned that around last season, winning most of the head-to-head matchups, albeit by a narrow margin in many cases.

Marit seems stronger in freestyle races, although the difference is small and has shrunk over time.

I want to highlight the freestyle race all the way back in 2000, which took place at World Juniors.  Marit was around 20 and Justyna was around 17.  Obviously, Marit beat Justyna by quite a bit, but that’s not the interesting part.  It was a 5k interval start race and Bjoergen finished 37th (163.41 FIS points) and Kowalczyk finished 58th (199.42 FIS points).  I don’t know why I’m fascinated by instances of current skiing superstars racing slowly in the past.  Maybe it’s because it highlights to me how difficult it can be to identify talent in endurance sports, at least based solely on race results.  Or perhaps it’s just another instance of the natural variation in skiing performance and being a stats guy I like variation.

On to Bjoergen and Kowalczyk’s sprint results: 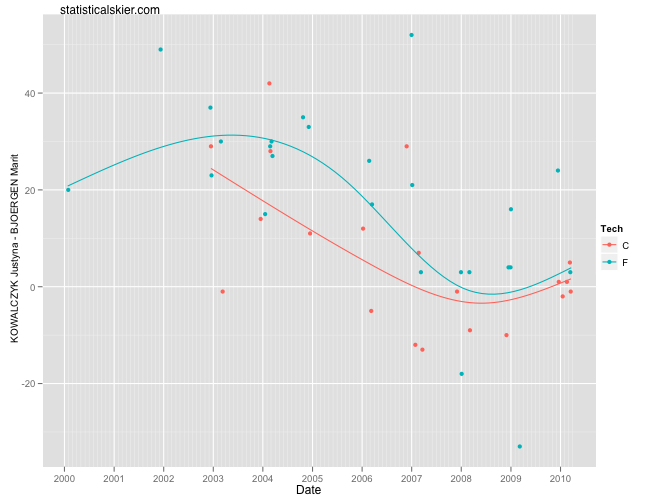 Points below zero indicate a victory for Kowalczyk, above zero a win for Bjoergen.

The difference between classic and freestyle racing seems more pronounced here (with a few exceptions, obviously).  The overall pattern is the same, though.  Marit had a significant advantage early on that has shrunk over the last few seasons.

Both skiers will likely continue to race for at least 4 more seasons, so it’ll be interesting to see how this rivalry plays out…

SPF: Slather it on