Now that I’ve introduced Distributed Sprint Points (DSPs), an alternate measure of sprint race performance, we’ll go ahead and give it a trial run, warts and all.  Since DSP is decidedly still in the experimental phase, take this with a hefty grain of salt.

My procedure will mostly track what I did to measure the most improved skiers in distance events.  For an explanation of my alternative sprint points measure, see here.  Once I’ve calculated these values, I simply found the difference in the average of each skier’s best five races.  Athlete’s who had done fewer than five sprint events in either the ’08-’09 or ’09-’10 season were ineligible.

The ten male skiers showing the biggest gains are shown in the following table.

Change in the average of the best five sprint races, using my alternative points measure.

The first thing to note is that only the top 4 or so posted genuinely large gains.  For whatever reason, the rest of the top ten consists of skiers who improved, but modestly.  This might be a result of my alternative sprint point system, or it may be that there just weren’t a ton of large improvements among male sprinters this past season.

There are plenty of familiar names on this list, though.  Emil Joensson, Marcus Hellner, Oeystein Pettersen, Nikita Kriukov and of course Andy Newell are all elite level sprinters who seemed to have had better sprint results in ’09-’10 than in ’08-’09.

Maciej Kreczmer is a veteran Polish skier who’s been skiing World Cups since around 1999.  Jesper Modin is a young Swedish skier who seems to have managed several top ten finishes and his first podium (3rd in Rogla) this past season.

Let’s look at each of these ten skiers.  The graph below shows their results using my alternative points measure.  The red dots are races where they did not make the elimination rounds, the blue dots are races where they did.  Remember to be careful with this new point measure.  It is still experimental, and as we’ll see doesn’t always work the way we’d like it to. (Click through for larger version.) 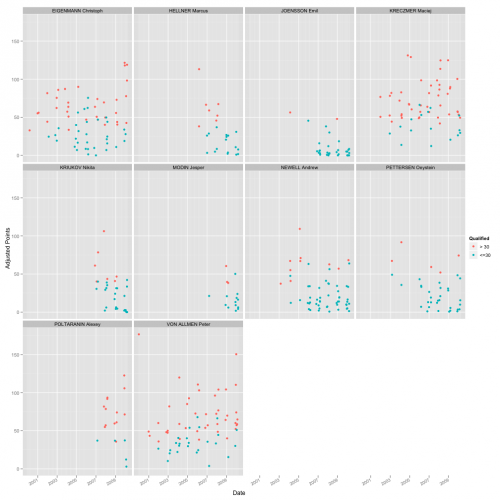 I’d say the only people who don’t seem to fit in a “most improved” scenario are Christoph Eigenmann and Peter Von Allmen.  If you look at just their two most recent seasons, I can see why they’re showing up as improved, and it isn’t the fault (I think) of DSPs.  Instead, we just have two cases where each skier did considerably more races in 2009-2010 than 2008-2009, and while their top 5 races are better, it may be that their top 5 races don’t adequately describe their seasons.

In general, looking at most improved sprint racers seems more susceptible small differences in results from year to year. But then, I think it’s fair to say that sprinting is generally more volatile, in that it’s easier for good sprinters to fall far down the results sheet.