Continuing on from Monday’s post, we turn now to the most improved women sprinter last season.

Here’s the table of the top ten most improved female sprinters on the World Cup:

First, the familiar names (at least, familiar to me).  Korosteleva and Ingemarsdotter are both excellent sprinters who’ve been around for at least a handful of seasons.  Astrid Jacobsen is an interesting name to appear: her best sprint seasons by far were ’06-’07 and ’07-’08.  She had a significant drop off the subsequent year in ’08-’09, which helps her show a major improvement for the ’09-’10 season.  Wikipedia is telling me that she had some significant injury and illness issues during the ’08-’09 season.  She appears to have bounced back with some good races in Vancouver, the Tour de Ski and one or two solid World Cup results.

Katja Visnar is a Slovenian skier who mainly seems to have succeeded in advancing further through the heats this past season, including several top ten results (6th, 8th and 9th).

Here’s the results for each of these ten skiers: 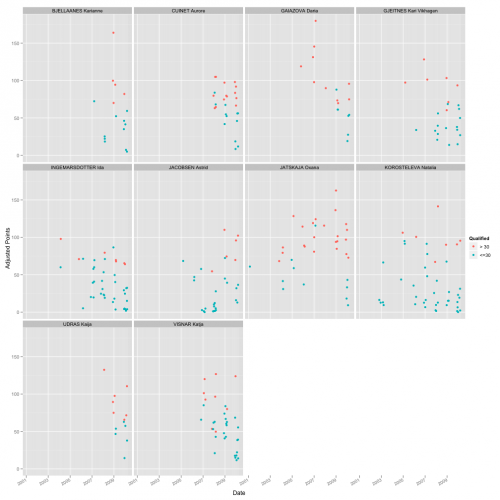 Recall that this is all using Distributed Sprint Points, which are explained here.  There are a lot of athletes here that I’m not so familiar with, so I’ll keep my commentary to a minimum.  Korosteleva’s “improvement” might also be mainly the result the slight dip in performance she had in 2008-2009.  French sprinter Aurore Cuinet had a handful of significantly improved sprints this year: 8th, 13th and 15th in World Cups.

Karianne Bjellaanes is a Norwegian sprinter I had actually not heard of before who definitely had two promising 5th place finishes in WCs last season.  Canadian Daria Gaiazova generally hasn’t had too much success sprinting but managed two 12th place finishes last season as well.

In Contrast to Lake Placid Venues, Soldier Hollow Blazes its Own Path