I can’t believe I forgot about the dominant Estonian skier Kristina Smigun-Vaehi.  For individual events (distance and sprint), her stats are amazing: three Olympic medals (2 Gold), four World Championship medals and forty-nine World Cup podiums.  106 of her 161 World Cup results were top ten finishes.  She might not have as much Olympic hardware as a few of her contemporaries, but she always seemed to be in the hunt for a medal.

Of course, Smigun ran into a spot of trouble back in 2002 I believe, testing positive for steroids but was officially “cleared” by FIS when her B sample came up clean.  Needless to say, a lot of people remained suspicious, which is par for the course when doping is involved.  In any case, let’s take a look back at her career, distance races first: 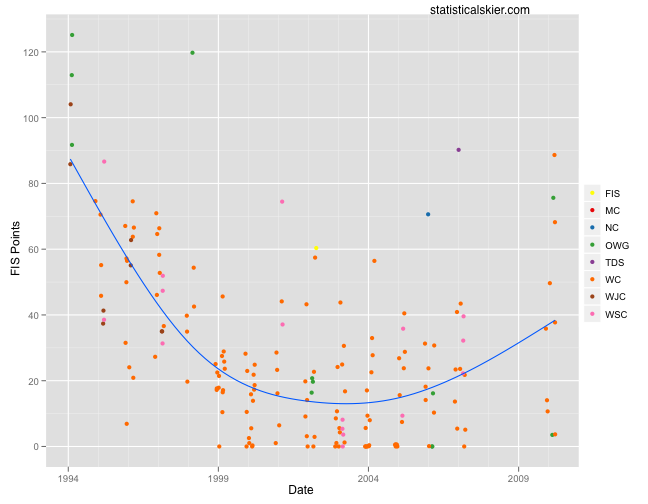 As you can see from this mass of orange dots, being a super-fast skier from a nation with a tiny ski team means you get lots and lots of World Cup starts for many, many years.  Smigun made a big jump in 1998-1999, but her breakthrough season was probably the next one.  Interestingly, the 2000-2001 season stands out a bit as an odd one for her.  She had some solid races early in the season but then had a pretty terrible World Championships and then didn’t really race beyond February.

The big gap is from a break she took to get married and have a child, I believe.

How about a technique preference?

Another skating specialist, although it’s interesting to me that it didn’t really manifest itself until she got really fast after 1999 or so.  And even then, it’s not overwhelming.

How about sprinting?  Smigun sprinted, but not a ton: 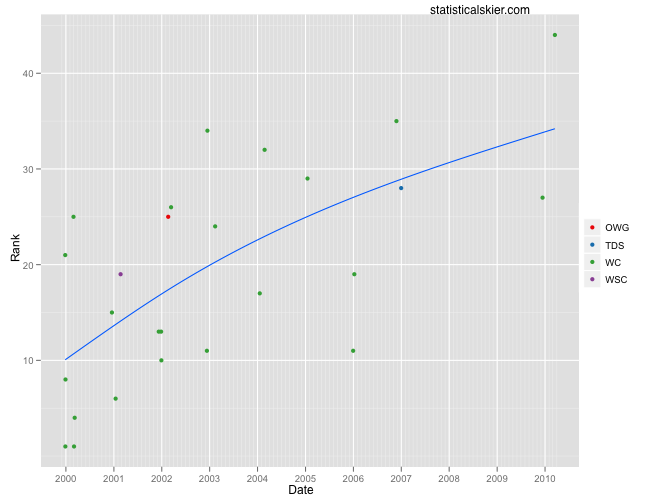 She had some early success back in the paleolithic era of sprinting, but clearly didn’t not focus on these events, particularly after the format settled down to the one we’re familiar with now.