Who?  Yeah, I’d never heard of her either.  One of the coolest parts of working on this website is learning how much I didn’t know about international ski racing.

The fact that I don’t know about this Swiss skier doesn’t really say anything about her (she’s done 115 World Cup races, 7 World Championship races and 4 Olympic races!), rather it says something about hard it can be to follow international ski racing from the US.  So, working on this website has made me a much more informed fan of the sport…

Still, Rochat isn’t exactly a household name, so it isn’t surprising that she hasn’t racked up a ton of top results.  Still, she won a Bronze medal in Salt Lake in the relay; she’s finished in the top-20 in World Cup (or Tour de Ski) races 19 times.  Her best was an 8th in a freestyle sprint.  She also finished 15th at the Turin Olympics sprint event.  And just for variety, she has a 12th in a 30km classic mass start at the 2005 World Champs.  Finally, Rochat won the Engadin marathon in 2007.  From the perspective of a fan of US skiing, that career is nothing to shake a stick at.

Let’s take a look at her distance results: 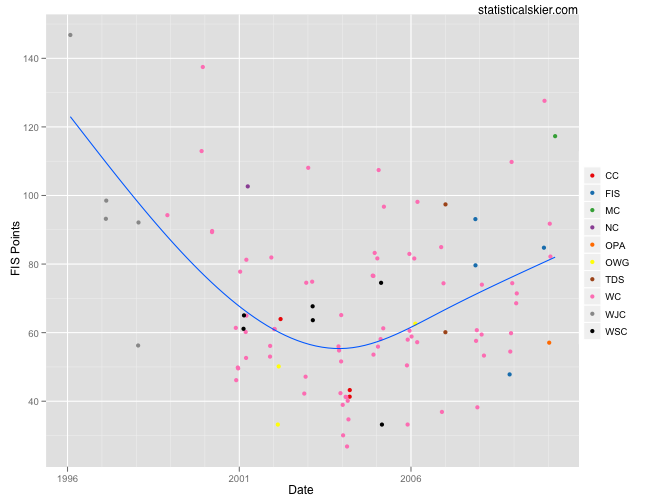 Is this general development pattern becoming familiar to you?  Cause I’ve spent countless hours with this data, and this is pretty classic.  Improve steadily, have a few good seasons, decline.  Pretty textbook.  Her best season overall was 2003-2004.

Her Engadin victory isn’t on here, since I don’t have FIS points for that race, but it probably would have been one of her better ones.  Still, she never really cracked her way below 25 FIS points.

One thing I’d like to note is her one great World Juniors race (in gray, 1998), where she finished 6th in the 5km freestyle.  While Rochat had an excellent career by a lot of standards, she certainly didn’t go on from this result to dominate the World Cup circuit, or even really contend with the leaders.  A single good result at World Juniors doesn’t mean you have a superstar in the making. 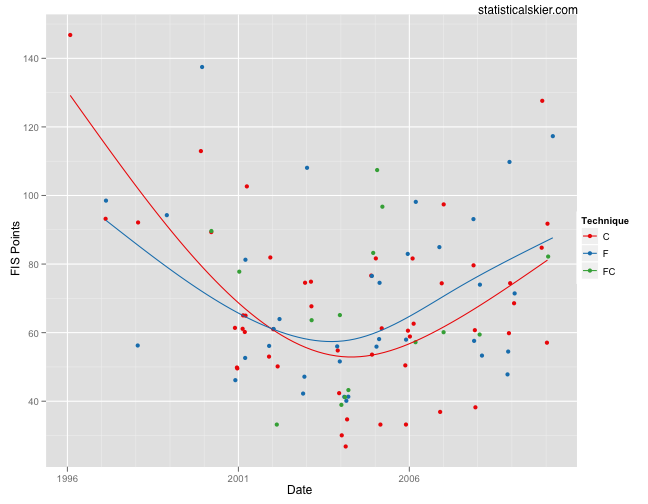 A clear win for classic here, at least from mid-career forward.  A curious victory, though.  Her best races tended to be classic, but she had plenty of slow classic races too.

I’m going to skip looking at her results by race length (because it isn’t very interesting) and move on to sprinting: 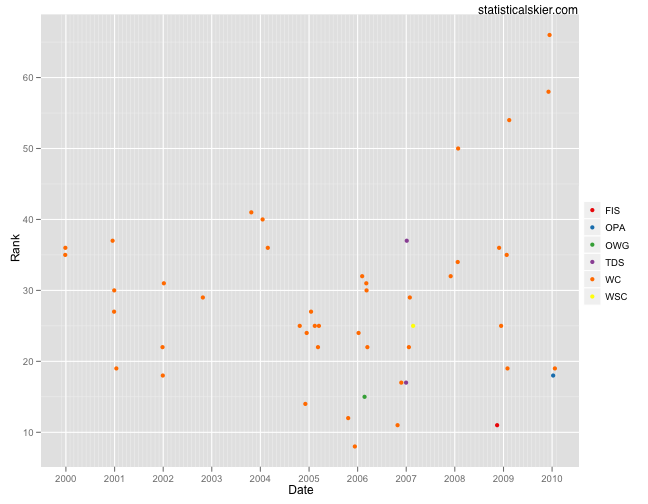 So I think we can conclude that Rochat might have preferred sprinting.  She certainly managed to qualify for the elimination rounds on a regular basis, at least until the last few years.  Did she have a technique preference in sprinting? 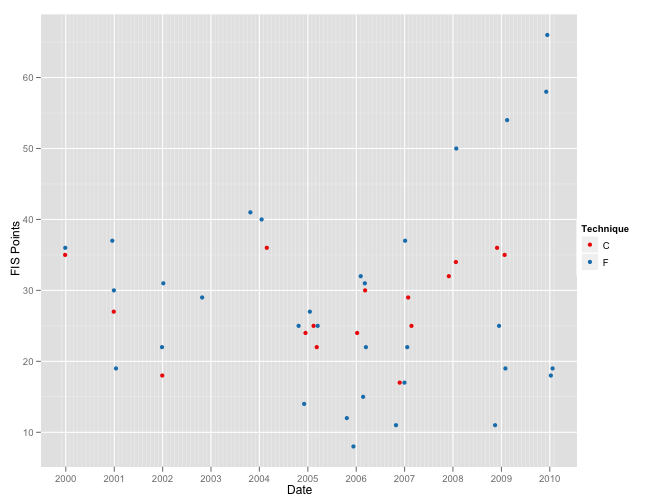 Note: y-axis label should be Rank not FIS Points.

Oh ho!  What have we here?  Someone who’s better at classic in distance races, but better at skating in sprints?  It would appear so!  Yes, it’s pretty weird that I get excited about this kind of stuff.