So far, applying my alternative sprint points measure to look at skiers with major improvements or declines between seasons has worked OK, but when we turn to female sprinters who saw a major decline things get dicey.First off, let’s acknowledge that Claudia Kuenzel-Nystad is getting a bum deal here.  She squeaked into consideration by doing exactly five sprint races last season, two of which resulted in very slow qualifying times.  But her other three races were basically right in line with the rest of her sprinting career.

I picked five races as a minimum cutoff, but clearly I should have tinkered more with different values.  Sprinting is just more volatile that distance racing, so it seems reasonable to require somewhat more races to include in an average.  Live and learn.

I suppose its fair to say that Evi Sachenbacher-Stehle had a significantly subpar sprinting season last year, but its not a huge drop off.  Otherwise, much of this seems slightly unfair.  I’ll have to revisit this again in the future… 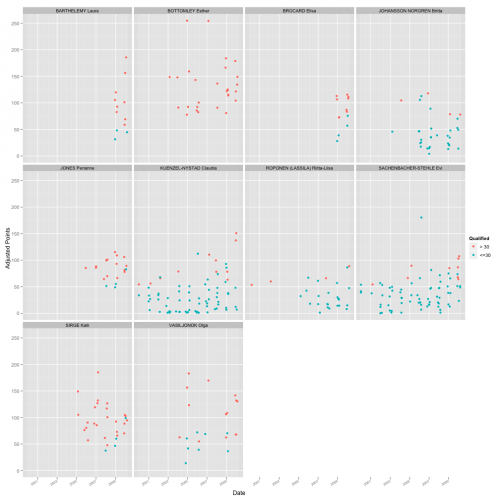