Continuing in my series of posts (see here and here) we move on to Norway.  This presents some problems, graphically, since as you might imagine there are many, many more Norwegians who’ve skied well at WJCs or U23s.  This means that if I simply recreate the graphs following my previous examples, they will likely be virtually unreadable.

So I’m going to modify things slightly (click through for larger version): 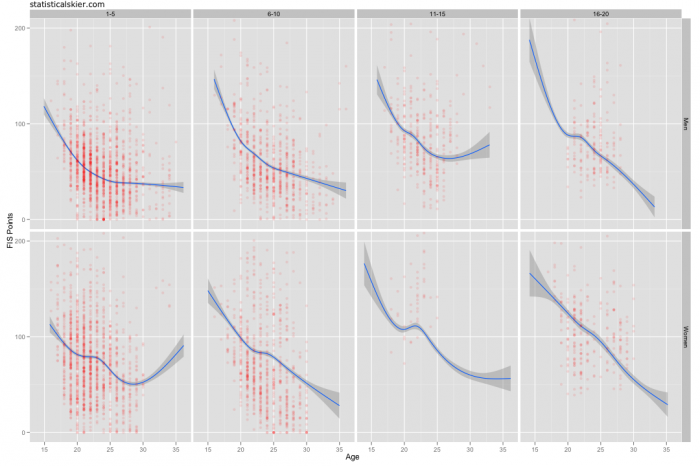 I have omitted the points for every single race, and instead only plotted points (in red) corresponding to the Norwegian athletes.  I’ve skipped the trend lines for individual Norwegian athletes as well, since there are simply too many to make sense of on a single graph.

As always, the blue trend lines represent everyone in each panel.  The red dots are races by Norwegians only.

I want to emphasize (strenuously!) how variable the Norwegian skiers are.  Look at the men’s 1-5 panel.  See how many red dots there are between 50-100, even after the age of 25?  Each one of those dots is a FIS point score by a Norwegian athlete who at one point finished in the top 5 at WJCs or U23s.  The Norwegians for sure have a ton of results that are super fast (i.e. near the bottom of each panel) but they also have plenty that aren’t so fast, even at later ages.

In case you’re interested, here’s a table with the names of the Norwegian athletes in each panel (you can sort the table by each column if you like).  As you peruse this table, I’d call your attention to the names you don’t recognize as world famous skiing stars and that not every superstar dominated at WJCs (e.g. Marit Bjoergen).