I’m breaking the rules and posting about running instead of skiing.  But skiers spend quite a bit of time running, and I’ve developed an interest in ultrarunning, so I thought this might be fun.

I was reading about the Comrades Marathon recently, and was suitably impressed that those runners are stringing together roughly 55 sub-6 minute miles in a row.  So I thought it might be fun to look at how distances affect running speeds.  Not a new idea, for sure, but fun nonetheless.

I grabbed some records from here and here<1.  Most are for set distances, but some are records for specific times (distance travelled in 12 hours, 24 hours, etc.).  I only used verified records, nothing that was “pending” or noted with an asterisk.  Obviously, when you get up above 10,000 meters, many of these races aren’t taking place on tracks, so the course and surface type will play a role.  Where possible I noted whether the race was on road or track (IAAF has some 100km records that I can’t quite discern whether they are road or track).  The chart is below: 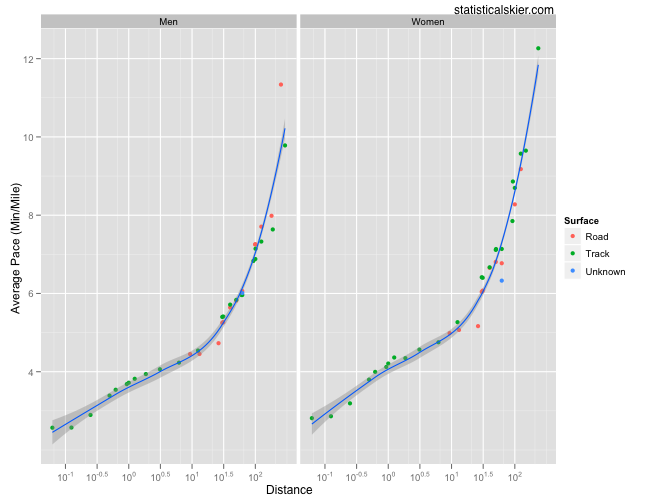 The speeds are recorded in minutes per mile.  The distances are in miles, but I’ve plotted them on a log scale, since they vary so much.

Something appears to happen at around 30 miles.  Also, just eyeballing the graph, it appears that when you increase the distance travelled by a factor of ~1000, the average speed over that distance decreases by about a factor of 3.5 or 4.  However, your body doesn’t really know how far you’ve gone, just how long and how hard.  So it might be more relevant to look at the same plot but with the total race time on the x axis: 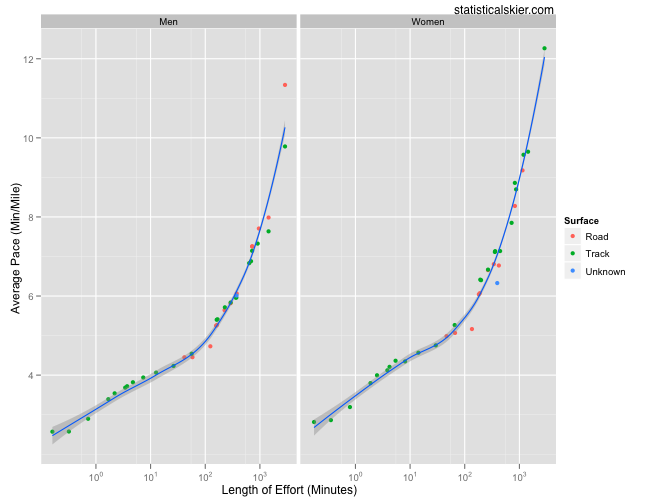 Since all I’ve changed is the scale, the shape of the plot hasn’t changed, just how we interpret the x axis.  Now we can see that the “bend” is happening at around 100 minutes for both men and women.  It appears that when the length of effort increases by a factor of 10 you sacrifice a bit less than 1 minute per mile until your total length of effort reaches 100 minutes.  Then for each increase in race time by a factor of ten you lose closer to 2-3 minutes per mile.

Before extending this too far, keep in mind that these data represent the very fastest human beings at these distances, so any relationship we find here really only applies to the very limits of human running.  What you or I experience may differ dramatically.