I recently received the following query from a reader:

I have looked lately into the Junior Worlds results and World Cup/World Championships results of all 2010 Olympic Gold medalists and almost all of them had an outstanding careers while they raced as juniors…If our end goal is to win Olympics then we have to look backwards from it and find common elements. So far the common thread I found based on 2010 Olympic podium athletes that if athlete is not fast by the age 19 the chance of winning Olympics gets very small. I was curious if you looked [at] it from [a] similar angle and from previous Olympic games.

This kind of question comes up a lot, I think, and is related to the posts I’ve been doing that look at plots of age vs. FIS points for skiers broken down by how successful they were at WJC/U23s.

I need to say up front that my ability to tackle this question is extremely limited.  It’s difficult to acquire useful data on top athletes when they were juniors (i.e. prior to age 20 or so).  I focus almost exclusively on results that are available at FIS.  How many junior races abroad aren’t FIS sanctioned?  Even if you start combing the FIS website, you’ll see that results for junior races (other than WJCs) did not really begin to be added with regularity until ~2003.

This means that my only available measure of how fast someone was as a junior is their WJCs results.  Now, I think we can all agree that using two races from one season may not capture how “fast” someone was at that age.  So right off the bat, we should take this with a huge grain of salt.

As long as we keep the data’s limitations firmly in mind, however, I think it can be instructive to look at what we can dig up.

Our starting point is “What, if anything, can we find in common among Olympic medalists?”  The first thing we should note is that there aren’t very many (distance) Olympic medalists.  So right off the bat I’m going to broaden the question to include podium finishes at the Olympics, World Champs or regular World Cups.  This isn’t exactly what my reader asked, but it will allow us to discuss more than a dozen skiers.

So, the first step is to grab the results from all those athletes who’ve podiumed (is that a word?) between 1997-1998 and 2009-2010.  Why start with the 1997-1998 season?  It wouldn’t be fair to include people winning medals in, say, 1995 since my WJC results only go back to 1994, and we don’t really expect juniors to immediately start winning World Cup races (although it can happen).  So we’re going to allow for a solid four year lag before we begin looking for podiums.

Of the resulting 97 men and 59 women, I have WJC results for 52 and 31 of them respectively.  Nearly all of the athletes that we’ve removed are simply too old for me to have WJC results for them.  However, 17 of them (10 men, 7 women) were (I think) eligible to compete in WJCs but did not for some reason.<1

How did these folks do at WJCs? 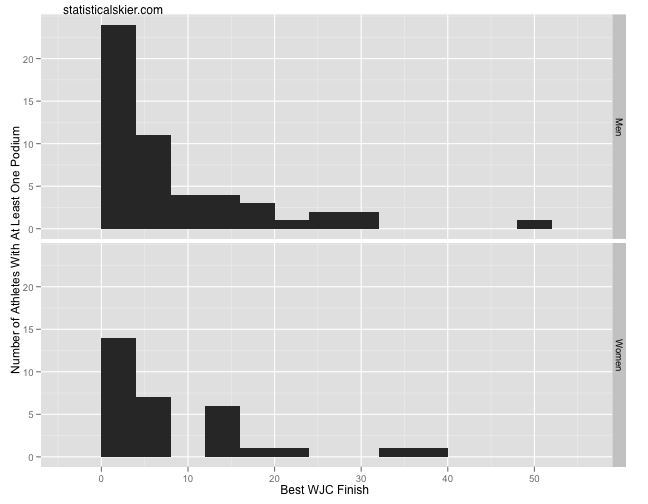 Most of them did pretty well (importantly, though, many did not!).  I know, big shocker.

But what about all the skiers who haven’t podiumed?  What were their results like?  That’s the problem with working backwards.  We’re going to keep running into other groups we need to compare our podium winners to.

Instead, let’s turn this around.  Suppose we take all the WJC competitors from 1994 to 2006 (there’s that four year gap again).  Roughly speaking, one of three things could happen to them:

I put plenty in quotes since we have to pick a number of starts.  I picked ten; any cutoff will be arbitrary, but this one makes sense to me.<2

My question is, what do the WJC results of these three groups look like? 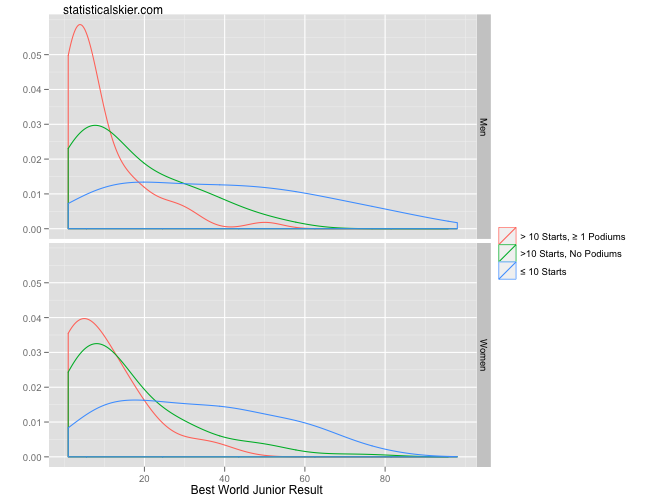 Not surprisingly, the blue group lags behind the other two.  People who don’t ski fast at WJCs are less likely to get the chance to race World Cups.  Our primary interest lies in the red and green groups, and it turns out the differences between them aren’t that big.  For the women, the distributions are extremely similar.

We should also point out that the skiers who never get much of a shot on the WC level (blue) come from all different types of WJC results.  Good, bad and in between.  There’s a lot more that goes into determining who continues on in the sport than a handful of WJC results.

Which brings me full circle to my original caveat: we’re using a handful of races as a proxy for a big concept.  It’s tough to capture how fast anyone is with just 2-4 races.  For completeness, though, I’ll post a follow-up on this topic to look at what happens when we look at how often someone reaches the podium, rather than just collapsing the data down to just two categories podiumed/non-podiumed.

Bets, Babies, and the Boys: George Grey Rolls On