So the big news in XC over the last few days has obviously been Russian skier Nikolai Pankratov being caught with some, shall we say, suspicious materials.  The first thing I do when I hear things like this are of course to look up his results like the last time…First Pankratov’s distance results: 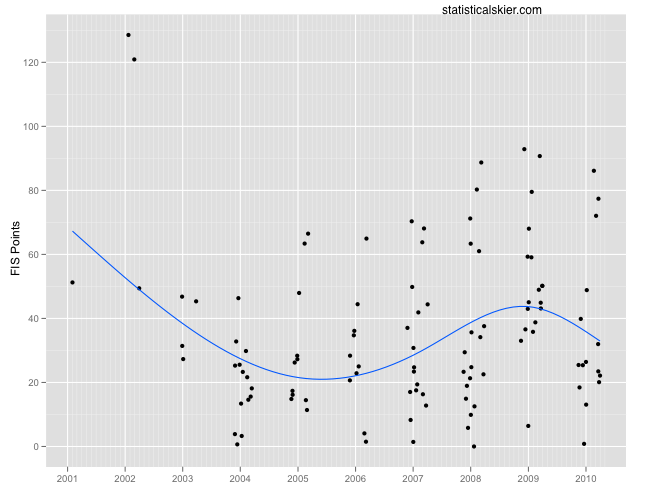 The early races in this graph are mainly a handful of Russian FIS races, 2 WJC races and I think one WC that he did in 2003.  Then Pankratov just suddenly starting WCs full time in 2003-2004.  He had a pretty darn good season too, with most every result coming in between 10 and 30 FIS points.

The ten podium finishes mentioned in the FasterSkier article linked to above include 7 relays but does not include Tour de Ski results<1, so he’s actually had four podiums in major international individual races: 1st in a pursuit in 2008, 2nd in a 15k classic in 2003, 3rd in the 2008 TDS 15k classic race and 2nd in a freestyle sprint in 2007.

Several interesting things about Pankratov’s results.  First, I’d say that since 2004 he’s been getting slightly slower, generally speaking.  He’s managed a few good results each season, but only a few.  And his worst results are getting consistently slower.  Second, the 2008-2009 season stands out as being somewhat odd.  He had a single good race, an 8th in the 15k classic at the TDS, but it was way better than everything else he did that season.  And then last season, 2009-2010, he’s nearly back to where he was in 2006-2007 and 2007-2008.  Illness or injury can explain a single bad season, but that one excellent race, literally sandwiched between more pedestrian efforts in a manner of days, seems odd to me.  Clearly, anyone can pop a great race, and he’d raced that fast in the past.  Still.  Given current information, I’d be busy updating my priors on him.

Sprinting is less interesting, since he’s not focused on it quite as much: 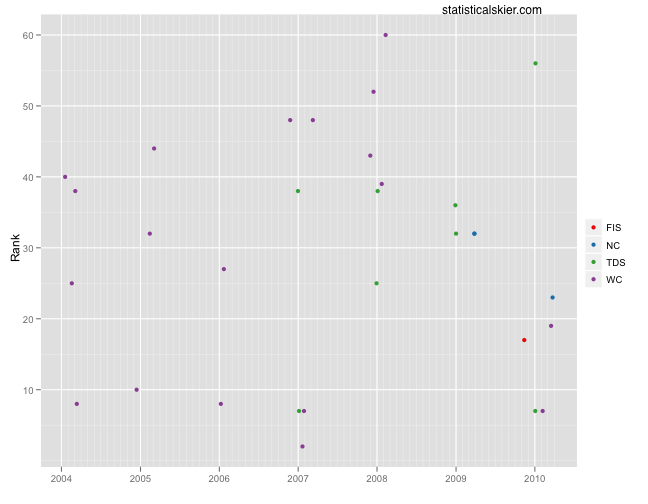 Not much point in a trend line here, not enough points.  I don’t have much to say about this graph, but thought I should show his sprint results as well just to be complete.