With more North Americans sojourning over to Europe to participate in high-level European racing that isn’t quite World Cups, I thought it might be interesting to take a closer look at the OPA (or Alpen) Cup and Scandinavian Cup series in a bit more detail.

As the name might imply, the Scandinavian Cup races are in, well, Scandinavia.  The racers are nearly all from Norway, Finland and Sweden (although Estonia has a large showing as well).  The OPA Cups are more continental European affairs, with racers coming mainly from Italy, Germany, France, Switzerland and Austria, among others.

Both circuits are, to my knowledge, generally considered a sort of “minor league” racing circuit just below the World Cup.  To get some sense of the competitiveness of these races, here’s a plot of the FIS points awarded to the top five finishers in distance events in each circuit: 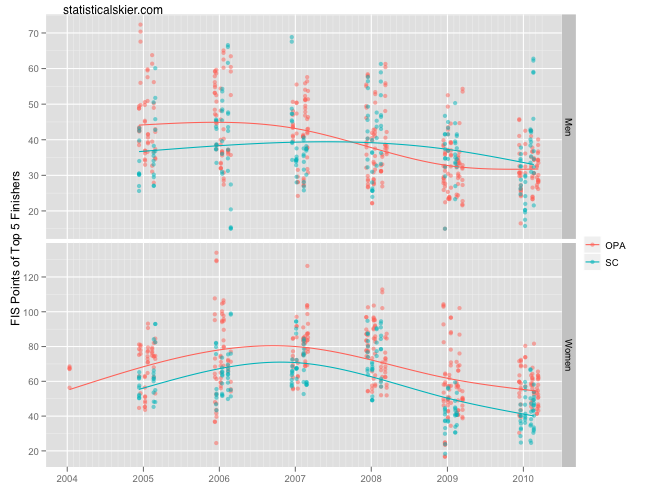 For the men, the two series seem roughly on par while the women’s Scandinavian Cups appear slightly more competitive.  Of course, this assumes we trust the system of assigning race penalties to accurately gauge the strength of the field on a particular day.

For comparison, the US SuperTour series (probably the highest level racing circuit in the US) has in recent years seen penalties (i.e. the FIS points awarded to the winner) averaging in the neighborhood of 40-60 FIS points for men and 80-100 FIS points for women.

NENSA Nordic Symposium Focuses on Growing and Improving the Sport