There are two somewhat different ways in which you could be considered a skating or classic specialist.  First, you can be noticeably better at one technique than the other.  Second, you could just only do races of one technique or the other.

These two situations might overlap, or they might not.  In any case, they are easier to consider separately.  Let’s look first for skiers who specialize via participating primarily in one technique or the other.  Some ground rules: I’m going to toss skiers with fewer than 30 WC, OWG or WSC races in their career, pursuits with a break will count as one classic race and one skate race, pursuits without a break will count as half of classic race and half of a skate race.

We could get picky about changes over time, particularly with changes in the number of classic/skate races available on the schedule each season, but I’m going to ignore that for now.  Also, keep in mind that there will be skiers here who’s careers extend beyond my database, so the data for them is incomplete.  Requiring at least 30 races weeds out the more extreme examples of this, but not all.

First let’s look at the distribution of the percentage of skate and classic races by athlete for their entire career: 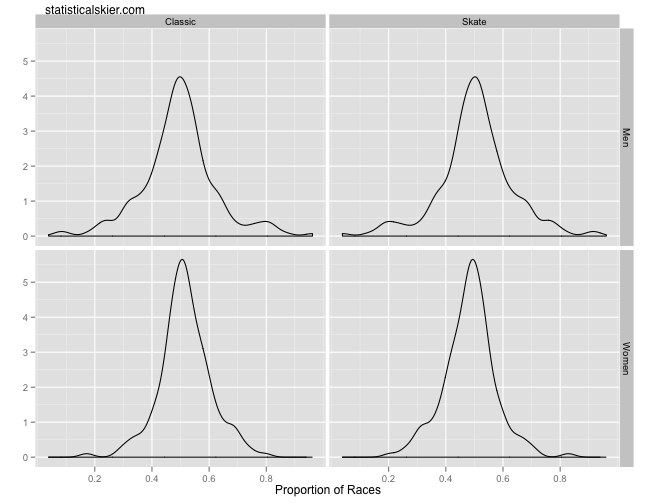 This is a tad redundant since the skate and classic proportions will always add up to one, so the densities in each row are just mirror images of each other.

The overwhelming majority of skiers are pretty balanced, doing roughly half skating and half classic races.  Oddly, the men’s distributions have slightly fatter tails than the women’s indicating that there are more men doing races of just one technique than women.

The interesting aspect of this is not the normal people, it’s the abnormal people, and there are a few.  You can check them out for yourself in the following tables (you can sort the tables using the column headers; my apologies to RSS readers, you’ll have to visit the actual page for these features):

If you look at the men’s classic specialists, there are the familiar Norwegians we’d expect to see: Hjelmeset, Jevne and Svartedal.  Andrus Veepalu and Hjelmeset take the cake for classic specialists with significantly more races than the others (not to mention the fact that they were actually quite fast).

With the women, Lina Andersson and Inger Nybraaten stand out as particularly fast classic specialists.  Nybraaten is a great example of someone who I only have races at the tail end of their career, so there is some question as to whether the 40 races I do have is representative of the rest of her career.  And she probably raced for a time when skating perhaps wasn’t really an option.

For some reason I had no idea Wendy Wagner did so many more classic races, but apparently so.

Turning to skating, Lithuanian skier Irina Terentjeva really, really prefers skating it would appear.  Some of the Russians I’m not so familiar with, but I recognize Arianna Follis and Karine Phillipot, who both seem to prefer skating with around a 60/40 split for each of them.

Skate Speed in the Pit