I am sure that anyone that strives for success in anything suffers with the issue of balance….. there are always questions of how much, when, why…  Or, if you’re me, the habit of taking on many different projects.  I think that many Nordic skiers, by nature, tend to be over achievers. When I was a ski coach for West High School my team consistently had one of, if not the highest GPA of all high school sports.  There is something to be said for associating endurance sports with people that like to work hard – and can push through pain. The ability to suffer says a lot about the human condition – and, the people that choose to partake in those particular sports.  Nordic skiers are generally tough mentally and physically.

With only 5 short weeks until my first race in West Yellowstone I find myself thinking about the concept of balance more and more.  Perhaps what I struggle with most are the expectations from others.  For example, friends want to socialize till the wee hours of night, people expect your attendance at parties.  At the same time they also want you to win races.  Last year, I won a free season’s pass to Alyeska Ski Resort and there were a handful of people that one day would encourage me to go tele skiing (or give me a hard time because I didn’t….) and the next day supported my bid to make the Olympic team.  From personal experience I can tell you – you have to make choices. At some point, you have to prioritize and you can’t do EVERYTHING in a society that wants you too. 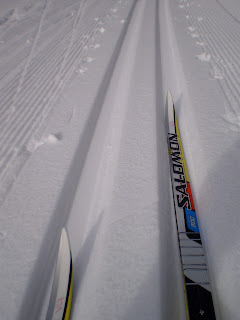 The first tracks of the year aren’t far away
Anyone that’s been around skiing long enough has heard of the three “S’s”….. School, Skiing, and Social.  Many coaches have told many athletes, “you can attempt to do all three and be mediocre at all three. Or, you can choose two and do them well.”  Now that I am a college graduate (and have been since 2004) there are even more aspects of life to juggle.  I struggle with my own balances between being a professional athlete, working part time as a coach, reaching out to my community, taking a graduate level class, being a good wife, a responsible home owner AND attempting to maintain social contacts and friends.  It’s a lot.  In addition to that is the requirement to get the rest your body needs when you’re training hard – and the rest your body needs to fight off sickness.
My coach, (and also my boss!) Erik Flora sent an incredibly wise and telling email to our team this weekend.  Race season is right around the corner and it’s time to buckle down!  See what he had to say.  It’s TRUE.
“Nobody who ever gave his best regretted it” George Halas
It is time to prep for race season. This period helps to set up the body for the specific demands of racing. It is an important  period to move at race speeds. To do this well, the body needs to be ready for each interval and speed session. There is a time of year for everything as a ski racer. The spring is for laying back, partying, staying up late, being busy, and cross training. October-November is time to ready for racing by being smart about life and training. The focus is race speed. Make sure to organize your life to get a minimum of 8 hrs of sleep and a nap at mid-day, be mindful of good sports nutrition,  extra clothes at training, and train to have success. Now is the time.