It’s nearing the end of October, which means that if you are a skier hailing from the esteemed institution that I do, that means its time for the Moosilauke time trial.  It’s an uphill running time trial beginning at the Moosilauke Ravine Lodge up the Gorge Brook Trail, ending around 3.6 miles later on the summit of Mt. Moosilauke.

Conveniently for me, Ruff Patterson, the men’s nordic coach, has kept copious records, so we have some fun data to look at!

The race is usually run once at the end of the summer term (August) and once near the end of the fall term (usually the last weekend in October or so).  Lots of people participate beyond the men’s and women’s nordic teams.  Both alpine teams do it, and there are often a bunch of  ”Guests”: alumni, visiting college or high school teams, and occasionally the really fast parents of current nordic team members.

The runners are classified as:

I cleaned up this data slightly.  Specifically, I fixed some athlete name misspellings and reclassified some alumni from XM/XW to GstM/GstW, so that the XM/XW category reflects only current nordic team members.

Here’s a look at all the times by category: 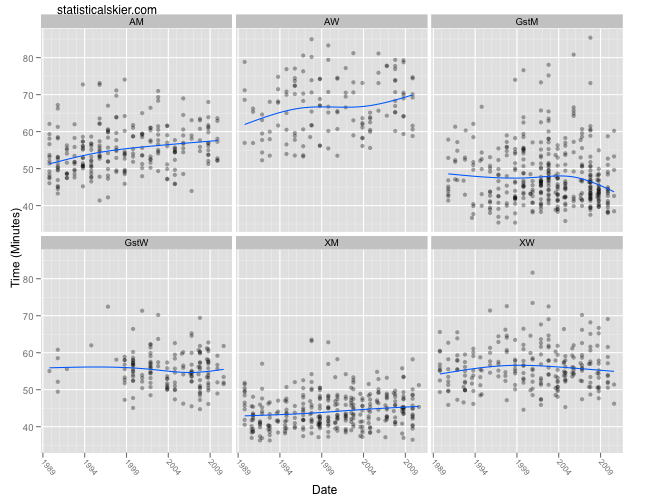 The recent dip in the average time for the GstM category probably reflects other college teams (UVM, Middlebury, etc.) showing up to do the time trial in recent years.

What I’d expect here is that the trends for XM/XW/AM/AW would be basically flat.  The reason is simply athlete turnover.  Every year you lose the seniors and get a new group of freshmen, and there’s no real reason to expect that the average speed of the incoming freshmen is going to change radically over time (except perhaps for massive changes in athlete recruitment which isn’t much of an issue at an Ivy).

The cross-country women meet my expectations pretty well, looking pretty stable at around 55 minutes.  The cross-country men appear to have gotten very slightly slower over time.  I’d argue that this is not a “real” effect, but just a reflection of the fact that the first year or two in the time series had an unusually large number of fast, sub-40 minute times, and these data are at the far end of the time series, giving them a lot of leverage.

As for the alpine men and women, I’m not sure what’s going on.  The trends here seem larger and less dependent on a bunch of fast times early in the time series.

Instead of focusing on just the average time, we can look at the trends for specific quantiles: 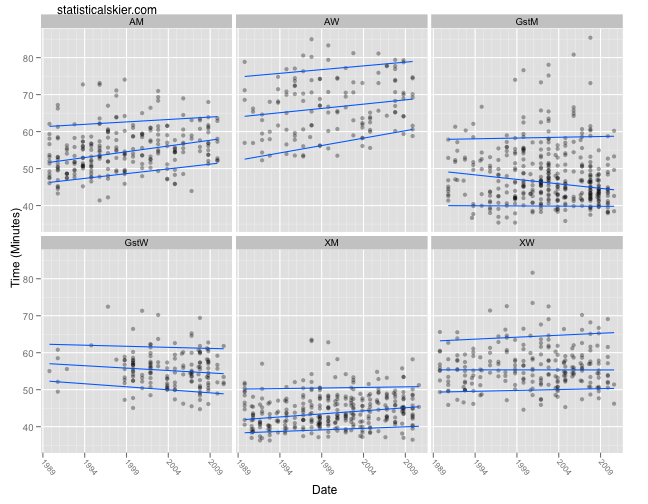 In each panel the three lines represent the bottom 10% (top line) the median (middle line) and the top 10% (bottom line).  All I’ll observe here is that it looks like the slight decline in times for the cross-country men is mostly confined to the middle, rather than the extremes.

One silly question we can ask is whether people tend to run Moosilauke faster in the summer or fall: 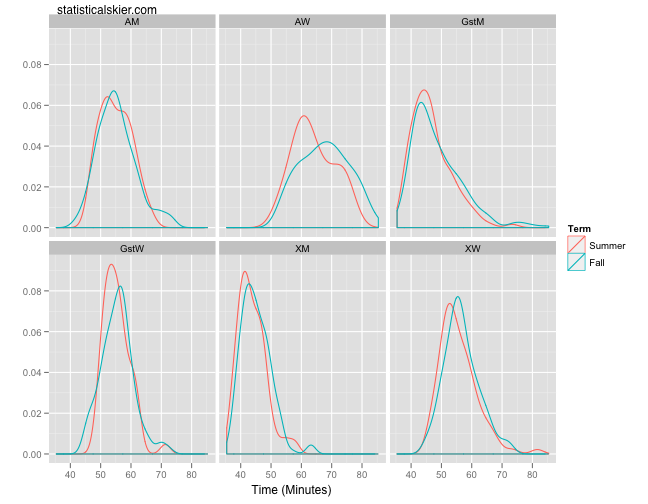 Not surprisingly, the answer is no, there’s not much difference.  Except maybe for the alpine women, who seem to have gone faster in the summer.

For those of you actually participating, I’ve broken down the historical times into quantiles, so you can see what sort of time you need to be in the top X% all time (or at least since 1989).