Conventional wisdom holds (so I’m told) that World Cup skiers go faster these days for a variety of reasons: improved grooming technology, improved equipment/waxing, larger athlete pool, better training/diet (on average) etc.  It would be neat if this trend showed up in results data.  Namely, have the top times for races of a set distance been falling over time?

As you can probably guess already, this is not so easy to establish.  Along with the factors I listed above that will generally push race times downward, we have the fact that race courses are being designed to account for this, presumably to make them more challenging.  The combination of all this might mean that we see no net change in times at all.  Or do we?

Since FIS can’t seem to stick to a single race format for more than 2-3 seasons, we’re stuck looking at data from interval start 15k/10k races for men and women.  This is the event that’s been held continuously over the longest time period and so give us the best shot at picking up changes.  Even so, we’ll have to split things up between freestyle and classic, for obvious reasons.

I’m going to focus in on the top ten times in each race, plotted below for men’s 15km interval start races: 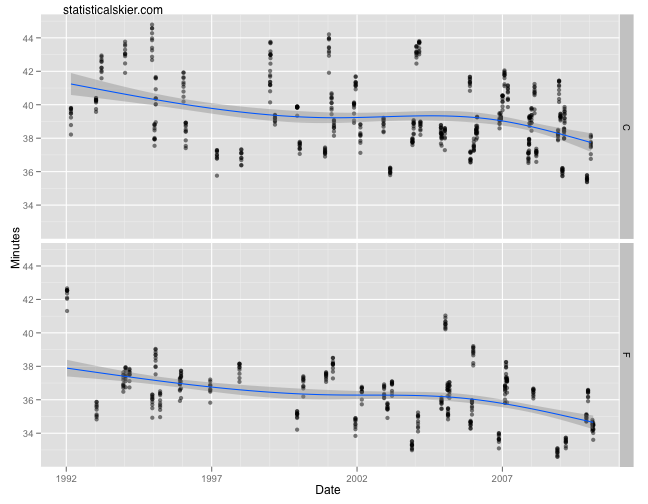 As with all skiing data that we’ve seen, there’s a considerable amount of variation.  We’d expect this, of course, since weather and snow conditions can vary drastically from race to race.  Despite all that “noise” though we can make out some signal, and it appears that a “typical” top ten time for a men’s 15km interval start race has declined somewhat over the past 18 years.

At first glance, the drop may seem quite gradual and almost inconsequential.  However, if we look at it in an absolute sense, we see that dropping 2-3 minutes (!!) off of average top ten times is quite a difference.

How about the women?  Here’s a look at the equivalent data for women’s 10km interval start races: 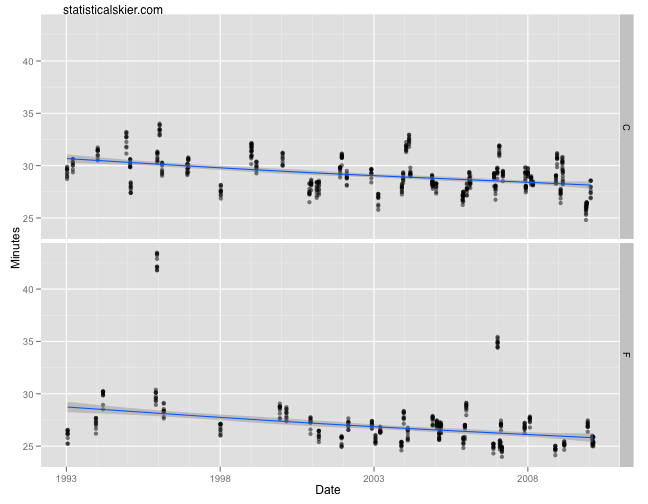 So the first Very Slow 10km is this race.  I’m inclined to chalk that one up to bizarre weather/snow conditions, unless someone knows for a fact that FIS has labelled it wrong (i.e. it was actually a 15km).  The more recent Very Slow 10km is this race, from the Tour de Ski, which should set off warning bells.  Sure enough, this should be a “handicap” or pursuit style race, not an interval start.  Sometimes FIS labels them, sometimes you have to dig around in the PDFs.  Fun stuff.  In any case, here’s the same plot with these two “problem races” removed: 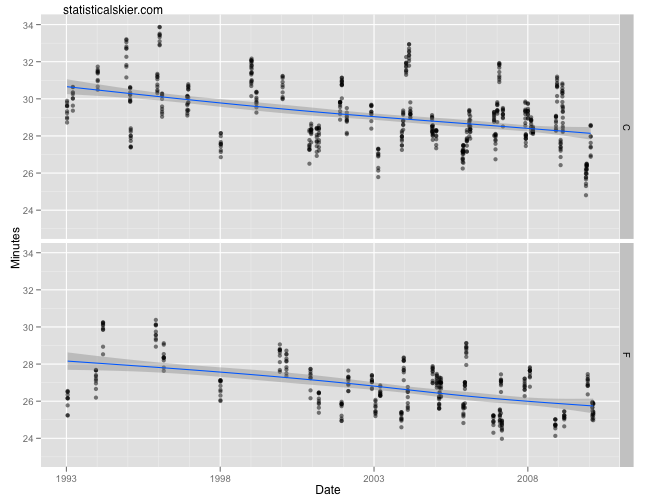 Again, a 2-2.5 minutes reduction in the average top ten time is fairly impressive, especially if the courses have indeed been getting harder over the years.

Article about our new coach

Read what Billie Jean King has to say....