I thought it only fair that I give our good neighbors to the north the same treatment as I did with the USST previews.  These will be a bit shorter on the gab, though.  We’ll start things off with Alex Harvey and Devon Kershaw.

Both of these guys are probably more of a threat in distance events, so we’ll start there. 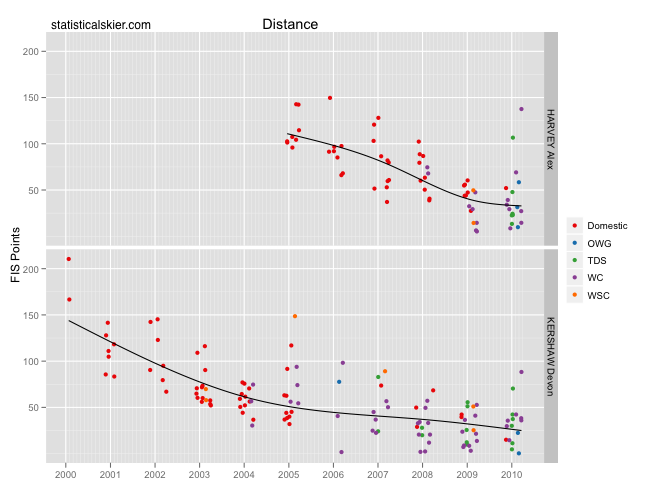 A “domestic” race in this instance is just a catch-all category referring to everything else: FIS races, national championships, Nor-Ams, etc.

Harvey, as you can see, made a big jump in the last two seasons.  Kershaw has been steadily improving for a number of years.  Both have managed to become regulars in the top thirty over the last few seasons.  Even better, they both seem fairly well balanced between classic and skating (although Kershaw’s classic skiing have a bit of an edge on his skating).

The big question with these two is whether they’ll be able to step up from finishing in the teens and twenties in WC races, with an occasional top five, to being a more consistent presence in the top ten or top five.  That kind of jump would make them regular podium threats, but it’s a bigger jump than you might think.

In keeping with my general caution, I’m going to predict that both Harvey and Kershaw follow up good seasons with another good season.  Seeing either of them consistently in the top ten would be pretty awesome, but that kind of jump is a long shot, I think.  More likely is a modest improvement: consistently in the teens, occasional threats for the podium.

We might not think of either Harvey or Kershaw are primarily sprint races, but Kershaw at least has had some success in these events: 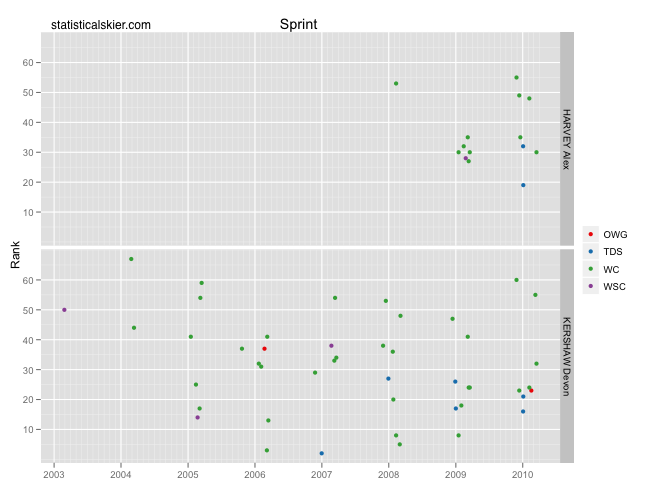 It doesn’t make much sense to compare domestic and international sprint races (statistically speaking) so I’ve omitted them here.  Harvey’s main goal ought to be qualifying consistently, as he’s mostly been right on the bubble.  Kershaw has had several top ten finishes in WC sprint races over the years, although he hasn’t been terribly consistent, sometimes being quite a ways from qualifying for the elimination rounds.

More worrying is that Kershaw’s best sprint results in each season have been slipping a little over the last few season.  Some of that could just be getting unlucky in the elimination rounds, which can make sprinting pretty unpredictable.  In this light, it’s a promising sign that Kershaw had a strong showing in the sprint race in Bruksvallarna this past weekend.

I’m not sure what’s in store for these guys in sprinting this year.  I’d like think that Harvey will step things up and that Kershaw will return to the occasional top ten, but I don’t know.  I think it’s more likely we’ll see more of the same, or modest improvements, from each of them.