Now for some of the folks across the pond.  I’m less familiar with a lot of the European racers, so who I focus on will be largely dictated by what stands out to me in the data (or you can drop me a line if you think there’s someone I should put under the microscope!), not necessarily just who wins or earns a podium. 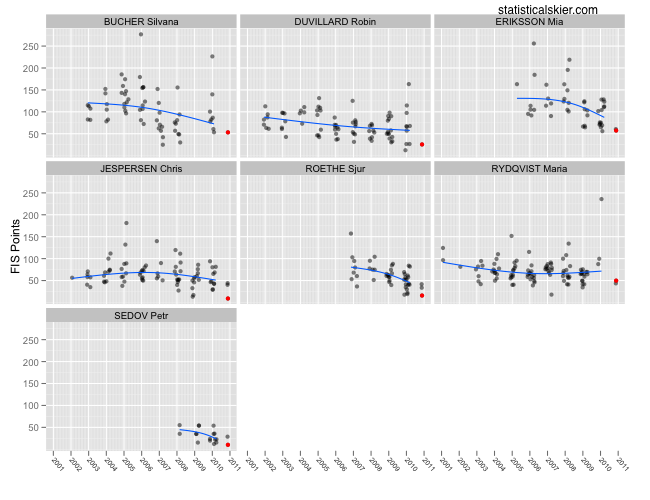 I’m plotting all races, not just major ones since several of these skiers only have a few WC races under their belts.

Petr Sedov is an obvious standout here, particularly given how young he is.  Notice how little data there is on him!  I don’t have an “official” statistical take on this, but after having spent many hours hip deep in results data, I’m willing to put myself out there and say that skiers who suddenly appear on the WC scene going that fast (without the steady, year over year improvement over many seasons on the WC) either (a) flame out completely and you never see them again, or (b) end up being Per Elofsson/Petter Northug.

At the moment, most people seem to be leaning toward option (b), and I certainly don’t know anything to the contrary.  Time will tell…

Maria Rydqvist we’ve discussed before, and it’s certainly nice to see her show that her race last weekend wasn’t a fluke.  I stand by my claim that this isn’t really wildly out of line with her general talent level (just look at her past results), but as a guy, it’s always awe inspiring to see women have kids and come back quickly to elite athletic competitions.  Unbelievable.

Sjur Roethe is a name that (being a dumb American) wasn’t really on my radar screen, but he definitely seems legit and has a less frighteningly quick development pattern (compared to Sedov) which makes me worry less about whether he’s “for real”.  Chris Jespersen, on the other hand, has actually been a round awhile, and Saturday’s result (4th) is considerably better than anything he’s managed before.  He was 13th in a 15km in 2008, but all his other WC starts have been in longer events (30-50km) and range from 28th-72nd.  Has the Norwegian men’s distance squad suddenly turned a corner?  Personally, I always thought that the complaints about their deficiencies were a bit overblown, but I suppose we’ll see.  Predictions at this point in the season are sure to make one look foolish, but I’d be pretty cautious about expecting this kind of performance from Jespersen on a regular basis.

Mia Eriksson has had two good races in a row now, being at the better end of what she managed last year.  I wonder if Rydqvist has stolen a bit of the attention early in the season, but Eriksson’s race in Gällivare was a much bigger jump for a WC race than for Rydqvist.

Two skiers who’ve been on a steady (if somewhat slow) improving trend are Silvana Bucher (SUI) and Robin Duvillard (FRA).  As such it isn’t necessarily surprising to see them starting strong, but it certainly must be encouraging.

Actually of more interest to me were some of the worse performances.  Here’s a selection of well known men who turned in races that might be considered “bad”: 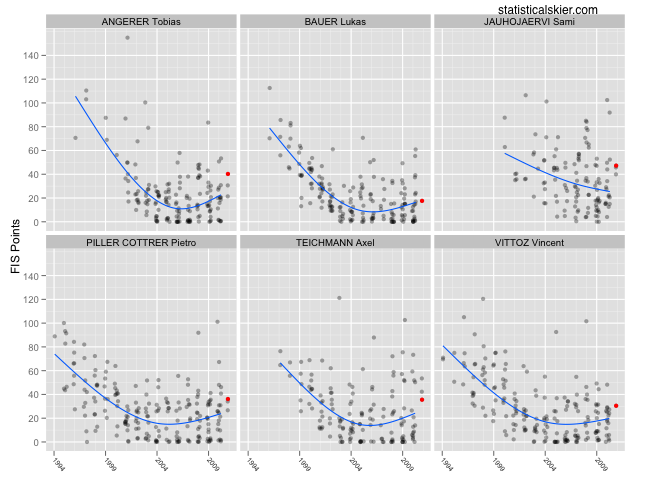 Bauer’s inclusion here is maybe a bit of stretch, seeing has how he was 8th, but compared to his past few seasons it wasn’t quite up to par.  Otherwise, do you notice a trend here?  With the possible exception of Jauhojaervi, we’ve got several skiers who are, for lack of a better word, old.  And their “average” performance has perhaps started to trend in the wrong direction.

Now, I’m absolutely not saying that guys like Teichmann, Angerer, Piller Cottrer, etc. are simply done for and we should count them out.  Far from it!  Each of these guys will I’m sure have some excellent results this year.  But we might be looking at the tail of their careers, where even though they are capable of competing with the very best, they may not be able to do it as often as before or aas consistently.

Sami Jauhojaervi is a bit different, I think, being slightly younger and never quite as fast as the others.  What does stand out with his results is how inconsistent they are.  His results seem like they’ve been all over the map, so it might not be terribly shocking to see him turn in a few poor races from time to time.

Here’s sampling of some women with sup-par races this past weekend: 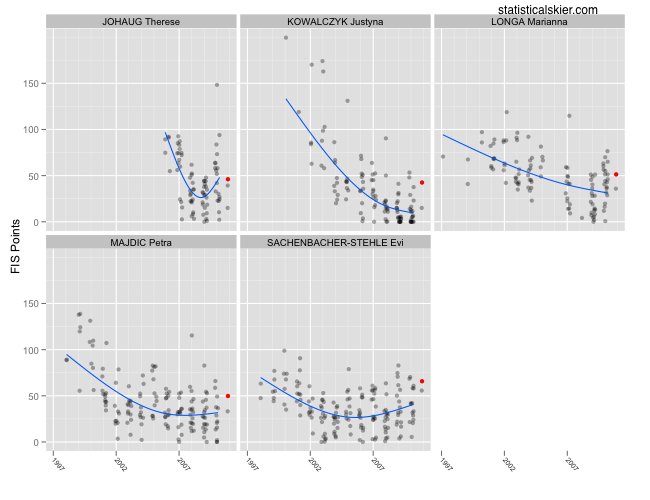 Again, calling Kowalczyk’s race “bad” is a bit of a matter of perspective.  But 7th isn’t what she showed up for, I’d bet, and she certainly doesn’t want to be as far behind Bjoergen as she was.  Similarly, Johaug was 9th, but I’m not liking the trend, short as it is.

I think the other three are in a bit more trouble, similar to the men above.  Again, it’s only one race, but these three appear to be on the wrong end of their careers and not necessarily trending in the right direction (although Longa’s change in fortunes is recent enough that the trend line doesn’t quite pick it up).  As with the men, you can’t write these ladies off, not at all.  But I don’t think we should be surprised if these sorts of skiers have seemingly poor races more frequently than we’re accustomed to seeing from them.

Taking the Rollerskis out for a Concrete Boot