This recap of this past weekend’s WC races will be a little different than before.  Rather than focus on individual performances, I’d like to look at the races as a group.  Stage race formats are relatively new to the cross country world, and these short stage races are even newer.  Since they are roughly modeled off of cycling style stage races, I thought it might be interesting to graph them accordingly.

Over the summer, I had some fun making bumps charts for the Tour de France and the Vuelta a España.  What do we get if we make the same plots for XC stage races? 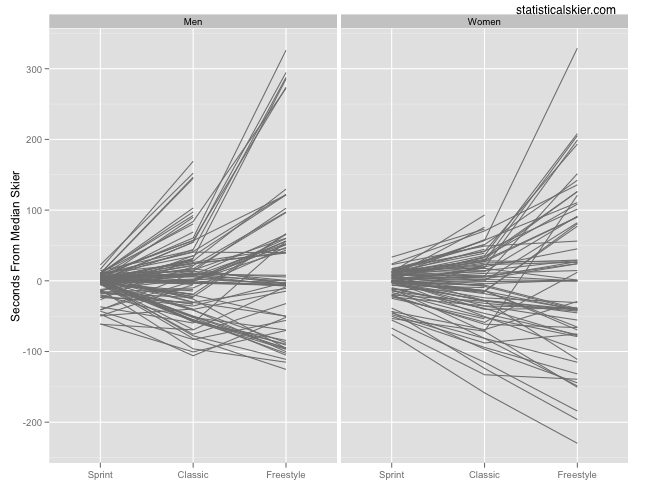 Each line represents a single skier.  I calculated the cumulative times for each skier after each stage (including the time bonuses for the sprint race) and then plotted each skier’s difference from the median after the end of each stage.  In a cycling race, the median time would roughly represent the ‘peloton’.  Lines that dip downward mean that athlete gained time; lines the shoot up are athletes losing time.  Lines that end before the last stage are skiers who abandoned.

We can easily spot Marit Bjoergen dominating everyone in the women’s race.  The men’s field saw a lot more shuffling, it seems.  The peculiar effects of pursuit style starts are apparent as well.  Despite the final stage meriting it’s own WC and FIS points you can see many skiers who were well off the back at the start of the freestyle stage losing even more gobs of time.  When you’re off the back in a ‘mass start’ type race, people have a tendency to just let up a bit and stop racing, I imagine.  Some of these folks may have just had a rough day, of course.

You can also see some distinct clumping in the men’s race.  You had a fairly large train of leaders, with a few individuals separating themselves by the end of the freestyle race and then two groups further back with a handful of skiers left in “no man’s land” between the first and second groups.

For the women, the front of the field ended up fairly spread out, but towards the middle you start to see some small groups of skiers together.

One of my main interests in making these plots was to investigate the relative importance of each stage to the overall results.  I have suspected for some time that performing well in the sprint races isn’t quite as crucial as doing well in the distance races.  It’s hard to see in the version above, but let’s try highlighting the skiers who didn’t qualify for the elimination rounds in the sprint: 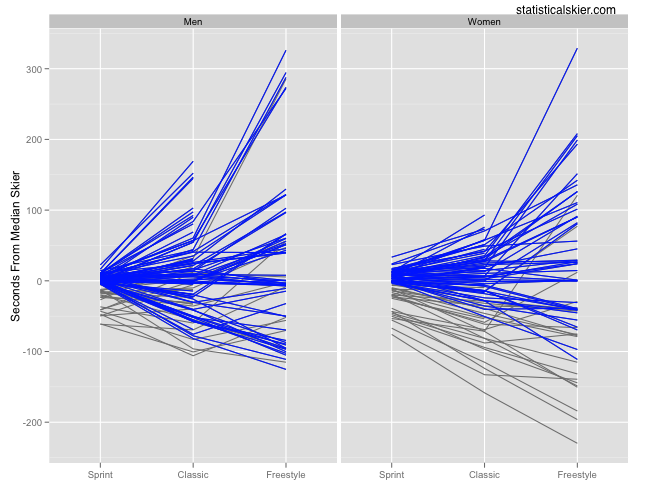 Quite a difference between the men and women, no?  The lesson here could either be that the women’s field just isn’t as deep as the men’s field, or that the time bonuses for the sprint race need to be different for men and women, or both.

The top thirty for the women remained largely unchanged after the sprint with only a few women sneaking up a few places.  The men saw a huge group of skiers charging up from well below 30th after the sprint to dominate the leader board.

I wonder if four stages would be a better length, adding in a second sprint race between the two distance events.  That would be a pretty brutal four days for the athletes, I imagine.  If you put a rest day in the middle the event starts getting too long for a weekend.  Additionally, I don’t think the time bonuses applied to the sprint races are lining up with how we think about sprint races.  It seems to me that your qualification time is only relevant insofar as whether it puts you in the top 30.  I think it might be interesting to scrap the qualification times for the top 30 and then reassign times to these skiers, working down from the 31st qualification time based on how they did in the heats.  So, using the same time bonuses, 30th place would receive the qualification round time of the 31st skier minus one second, and so on.  Of course, you could fiddle with the time bonus amounts to achieve whatever sort of advantage you’d like.

If I have time I might put together a short post on some individual skiers who did well or poorly in Kuusamo, but I’ve got quite a few posts on tap for this week, so we’ll have to play it by ear.  If you have any particular skiers you’d like to see graphs for let me know in the comments (or via email) and I’ll try to oblige.