Since I’ve been making some graphs now and then for the folks at skidpepp.se, I’ve been paying more attention to the Swedish skiers.  I noticed that one performance last weekend that turned some heads was Maria Rydqvist’s second place finish in the distance race in Bruksvallarna, behind Charlotte Kalla.  Of course, everyone was quite some distance behind Kalla, but still, it attracted some attention.

This result seemed to surprise a few people (although that could also be Google Translate misleading me…) and led to her being selected to join the Swedish National Team at the World Cup races this weekend, so I thought I’d look a little more closely at her results.

From what I can gather, Rydqvist just recently had a child (as recently as four months, if Google translate isn’t tricking me) and so she didn’t race much last season, as we’ll see in a bit.  At least, I’m assuming it was because of her pregnancy; feel free to correct me in the comments!

Let’s start by looking at just her performance in this one distance race against this particular field.  Using the same style of graph from earlier this week, we get this: 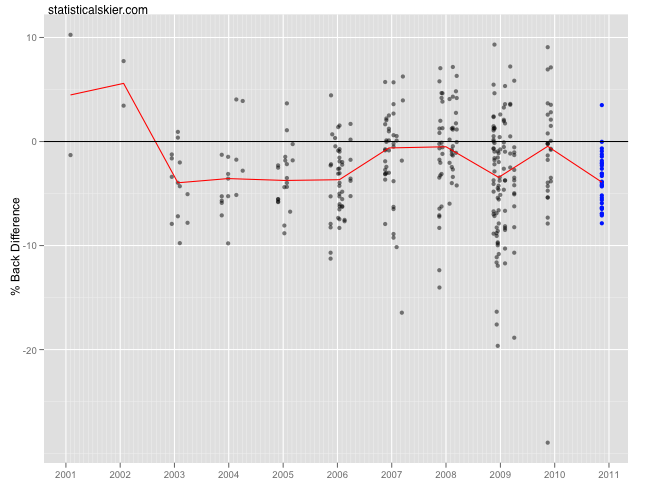 Recall that each point here represents an instance where Rydqvist raced against one of the top 40 finishers at the race in Bruksvallarna.  We’ve calculated the difference in their respective percent back in each case, so positive values mean Rydqvist was beaten by that person in that race and vice versa.  The blue are from the Bruksvallarna race and the red line represents the median performance against this field over time.

This would suggest that Rydqvist had a somewhat better than average race, but not one that is wildly out of of line with the past.  In fact, her performance against this particular group of skiers has remained generally flat over time.

Just for comparison, let’s see how this stacks up against using FIS points: 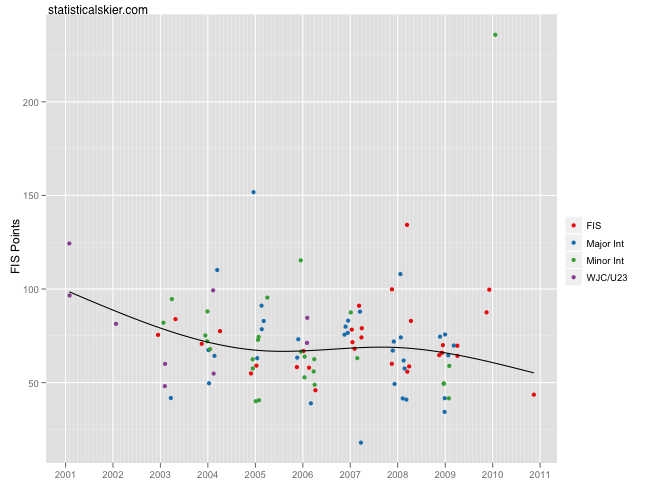 By this measure, we see roughly the same sort of trend: generally consistent performances in the 45-90 FIS points range, with perhaps a slight downward (improving) trend.  Her latest race this past weekend (red dot all the way to the right) is good, but right in line with her best performances, generally speaking.  The unusually good race in 2007 was a late season WC pursuit in which she finished 14th.  Note the absence of much racing in 2009-10, presumably due to her pregnancy.

2006-07 seems a bit odd, actually, with most of her results slipping a bit, with the exception of that one excellent 14th.

Now, when it comes to selecting people to ski in WCs, these measures may not provide all the relevant information.  Ultimately, we’re usually more focused on things like scoring WC points (i.e. top 30) or podiums (top 3).  So let’s look at what Ryqvist’s results have been like measured simply by her finishing place on the WC: 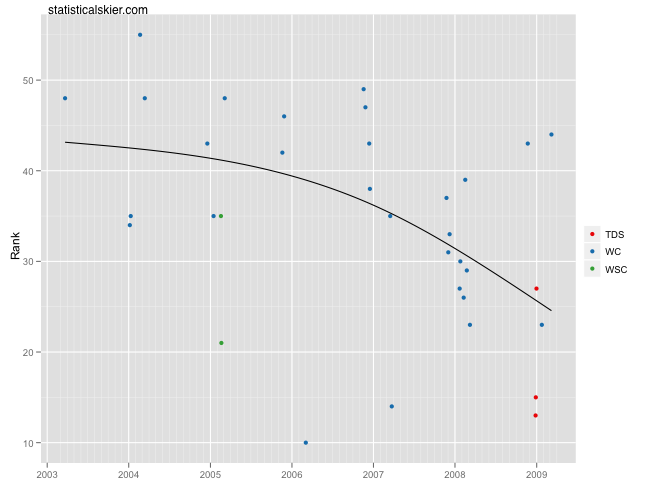 Obviously, there’s a lot less data here, and it stops in 2009, since Rydqvist appears to have essentially missed the last season.  But from the perspective of someone (say, a coach) looking for skiers to score WC points, this looks promising, right?  She’s been gone a year, but when she left she was definitely on the right track it seems.  In particular, it seemed like she was transitioning from occasionally popping one great race every season to consistently putting herself in the top 30.

In that context, her result this weekendin Bruksvallarna might seem particularly promising: she’s shown that she came back from her year off skiing roughly as fast or faster than when she left, and she was trending in the right direction when she left.  A legitimate question mark, of course, is whether she has the fitness, after her pregnancy, to perform at this level consistently for an entire season.  Ultimately, I guess we’ll find out when she races!

US Ski Team Looking For Success Across the Board, but Focus is on World Champs