Aside from being a yummy holiday treat, Thanksgiving turkey is a term used (in North America, at least) to refer to ski racers who come out of the gate kicking everyone’s pants off in November or December and then fizzle out for the rest of the season.  A friend urged me to write a post on this subject recently, so here it goes…

If you’re unfamiliar with high level ski racing, you might need a little background.  The way that elite training works is usually built around the fact that the big, important races that you really want to be skiing fast for are later in the season in February or March.  That means that skiers try to structure their training through the first part of the racing season such that they get steadily faster.  The concern is that if you go into the ski season in November already “peaked”, it can be very difficult to maintain that level of fitness for the next 2-3 months and you end up “burning out”.  There’s lots of complicated physiology and training principles at work here, that I’ll likely get wrong if I try to explain.  So let’s just accept that this is a real concern and leave it at that.

I’m not here to dispute the idea that this happens.  If you go looking for instances of skiers going really fast early in the season and then flaming out later on, you can certainly find them.  (And I’ll do just that later on in this post.)  The “statistics” question here would be whether there’s an overall trend.  Do skiers who go really fast early tend, on average, to end up skiing really slow later on?

Color me skeptical.  There are a variety of issues here:

All this will make any general trend very difficult to discern, but let’s see what we can see in the data.  Since comparing performances within athlete (going fast relative to your previous self) is quite a bit more complicated, I’m going to stick with absolute comparisons.  The other headache in this investigation is deciding what group of skiers to look at.  Do we only want to consider skiers with a podium in Nov-Dec?  A top 5?  Top 20?  All of these things are possible, but to prevent this post from spiraling out of control, I’m going to just use FIS points.<1 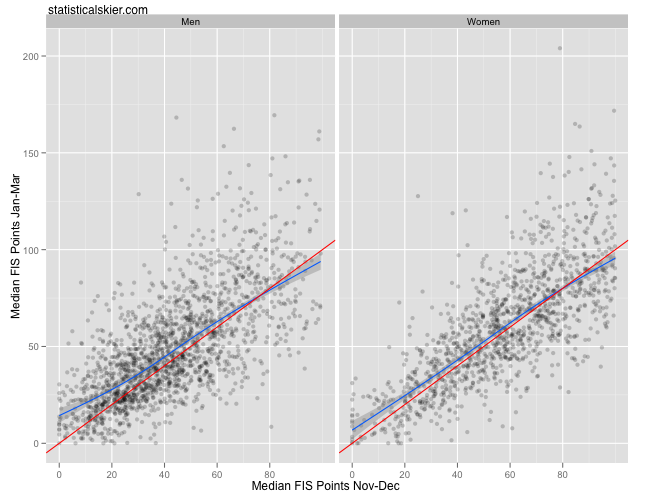 First note that from a bird’s eye view, these two quantities are actually quite strongly correlated.  This isn’t surprising, really.  People who ski fast are likely to ski fast in the future!  And note further that this cuts directly against there being an overall tendency for skiers who ski fast early on in a season to flame out in later months.

The blue line is a fitted trend line to the data.  The red line represents a theoretical relationship where everyone skis precisely the same in both halves of the season.  Dots above the red line represent skiers who skied faster in Nov-Dec and vice versa.

Note that the blue trend lines for both men and women drift above the red line slightly.  This would seem to be evidence that skiers who go super-fast in Nov-Dec (< 20 FIS points) have a tough time maintaining that level in Jan-Mar.  But remember that we’d expect that to happen simply as a result of reversion to the mean, which isn’t necessarily related to any particular time of year.

Suppose we have a skier who’s average performance is around ~30 FIS points.  Given the natural variation of ski racers and the small number of races early in the season, it’s entirely possible for them to have an occasional 5-10 FIS points race, regardless of the time of year.  Even in November!

Again, none of this means that the “Thanksgiving Turkey” phenomenon doesn’t happen.  But I can’t seem to find much persuasive evidence that it happens generally, across all skiers.

Ok, the wet-towel portion of the post is now concluded.  Let’s have some fun looking at specific examples of skiers who’ve excelled in Nov-Dec and then struggled in Jan-Mar.

Clearly, I don’t know the personal histories of each of these skiers, so who knows what sort of injury or illness issues might be at play here.  Still, this just goes to show that yes, you can certainly find some extreme examples of skiers going very fast early on and then flaming out for the rest of the season.

Since Hetland seemed to pop up more than others, I thought I’d take a closer look at his results: 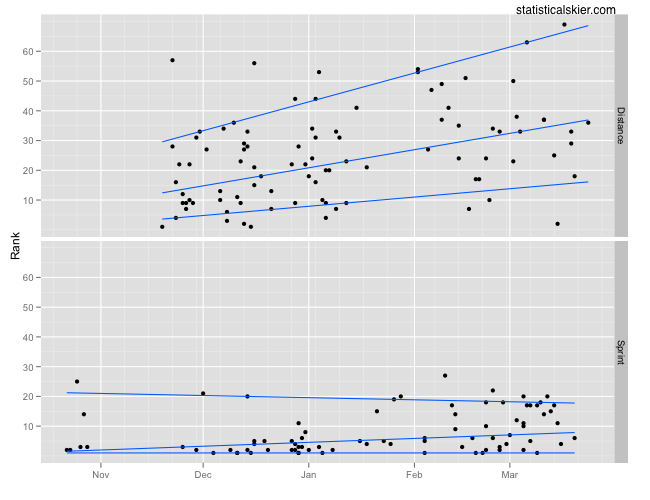 This graph contains all Hetland’s WC, OWG and WSC distance and sprint results by their date within a season.  So we have results from many different years plotted together here.  To keep things simple I’m sticking to finishing place rather than FIS points.  The lines are quantiles regression lines representing Hetland’s results at the 90th percentile (bottom line), median (middle line) and 10th percentile (top line).  This allows us to separate trends between someone’s “average” results and their “best” results.

In this case, it does appear that Hetland’s best distance results were somewhat better in the first half of a season.  In fact, he seemed to generally do worse as the season went on.  Of course, that’s just “one average”.  You can see that he still did have an excellent race or two late in the season.  This trend does not seem present in his sprint results.

So there you have it, your Thanksgiving Turkey!  Enjoy!