This is part four in a short series of season preview posts on USST athletes in which I’ll review each skier’s results to date and make some guesses about how they’ll fare in the upcoming season.  I don’t have any special insight into the future beyond my database of past race results, and I certainly am not using some fancy predictive model.  While I’ll likely support a fair bit of my guesses with data of some form, I obviously wouldn’t take any of my predictions to Vegas with you.  And of course, my guesses are just me being a cynical realist, not necessarily an expression of what I’d like to happen.

Andrew Newell is easily the USA’s best male sprinter, and he has been for several years now.  Along with Kikkan Randall, he has been the most reliable source for top international results year in and year out.  I’ve plotted his results (just the WC, OWG and WSC ones) below.  I’ve used rank (finishing place) rather than FIS points since that’s a more natural thing to look at with sprinting, and I wanted the two panels to have the same scales. 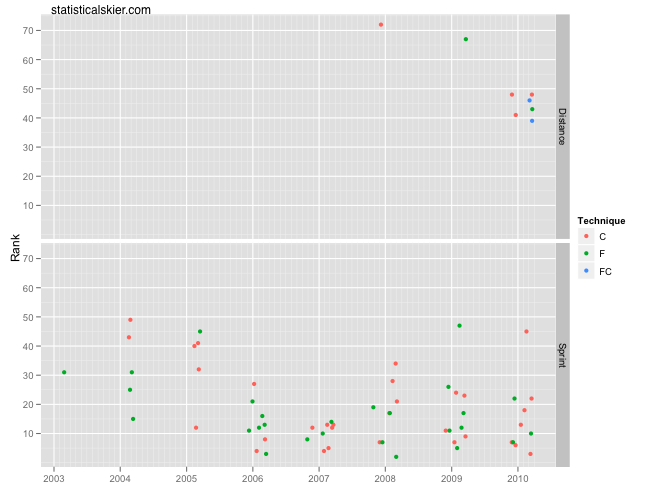 You can see that Newell started doing distance events more frequently last season.  A good portion of those are from the Tour de Ski, so in some sense he was “forced” into them in order to do the TDS sprints.<1  It might also be a result of the lengthening of sprint races of late, making distance events a bit more relevant for training purposes.

In any case, back to sprinting.  Unlike Kikkan Randall, Newell has been quite even between classic and skating.  He also has rarely had difficult qualifying for the elimination rounds.  All sorts of random misfortune can befall you once you’ve made the heats, so it’s tough to predict how someone’s going to fair exactly.

In general, I don’t see any noticeable trends in Newell’s sprint performance over the last several years.  His best year (so far, overall) was probably 2006-2007, which also coincided with the shorter sprint race era.  So he may have really had those shorter distances really dialed in back then, and has had to adjust (along with everyone else).

I’m betting he’ll pretty much continue what he’s done so far.  Namely, consistent top ten finishes in sprint events of both techniques with the occasional podium.  Interestingly, all three of his podium finishes so far have come in the month of March, near the end of the season.  I wouldn’t make much of that, statistically speaking (sample size, and all that).  Mostly it’s just a curiosity.  But maybe he’ll mix things up this year and pop a great race early.