This is part three in a short series of season preview posts on USST athletes in which I’ll review each skier’s results to date and make some guesses about how they’ll fare in the upcoming season.  I don’t have any special insight into the future beyond my database of past race results, and I certainly am not using some fancy predictive model.  While I’ll likely support a fair bit of my guesses with data of some form, I obviously wouldn’t take any of my predictions to Vegas with you.  And of course, my guesses are just me being a cynical realist, not necessarily an expression of what I’d like to happen.

Kikkan Randall is arguably the best American female distance and sprint skier at the moment.  That’s a pretty easy case to make on the sprinting side of things.  For the distance events, it’s mostly the result of her stepping up her performances over the past two seasons or so: 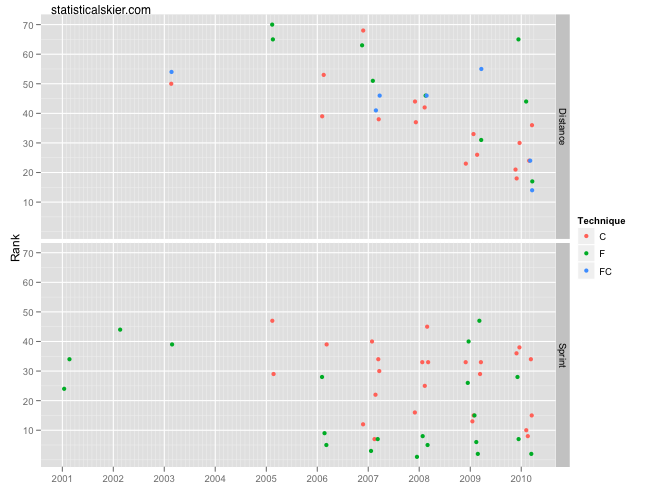 These are just results from WC, WSC and OWG races, and I’m using the finishing place in each race rather than FIS points.

Notice a pattern with the sprint results?  Yeah, she’s done better in the skating sprint races.  She did manage to have more decent classic sprint results last season, though, which is encouraging.  Generally speaking, though, those sprint results are remarkably consistent over the last four seasons.  When she’s failed to qualify for the elimination rounds, she hasn’t been much higher than 40th.

Randall reached the semis a bit less than half the time last season and if she’s looking to be a medal threat we should be looking for her to increase that rate to something closer to 60-70% which would put her more in line with skiers like Hanna Falk, Natalia Korosteleva and Arianna Follis.  As it was, there were 15 women who did at least as many sprint races as she did who advanced to the semis at a higher rate.

Her distance results are a little more balanced between classic and skating.  Randall’s distance results last season were really quite promising and didn’t get as much attention in the US as I think they deserve.  I’d bet there’s a real possibility that Kikkan could manage  4-5 top 20 finishes and maybe even crack the top 10 in some distance races, if she continues her current rate of improvement.

As for sprinting, I’m sure her focus is on winning a medal at World Champs in Oslo.  Luckily for her, that sprint will be freestyle, so there’s reason to think she might pull it off.  I’m betting she makes it to the final heat, but after that who knows.  But with four other freestyle sprints this season (including the one at the Tour de Ski) I’d say the chances are pretty high for at least one podium.

"US Trials Coming Up Next Week"