Kris Freeman is simply the best distance skier in the US at the moment, male or female.  In fact, he probably has been for at least the past 4 years or so.

Unfortunately, that means he’s under a lot of pressure to produce quality results, medals in particular.  That’s not terribly fair, in a cosmic sense, but I suppose that’s life.

One consequence of these expectations has been that he can come in for quite a bit of criticism when he doesn’t perform well.  From what I’ve heard about him, he’s probably harder on himself than most anyone else.  And in any case, I seriously doubt that much of the disappointment surrounding him in terms of “near misses” or “missed opportunities” is truly deserved.  Learning how to train and race effectively with diabetes simply makes everything he does harder.

All that aside, let’s look at how he’s fared over the years: 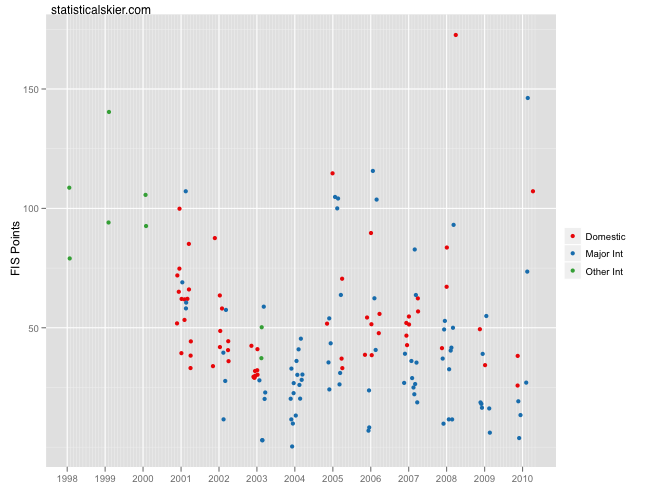 Freeman has actually been slowly returning to form over the past few season, despite the occasional very bad race.  An interesting thing to notice here is that Freeman’s career to date can be neatly split into two halves: before and after the summer of 2004.  Don’t believe me?  How about if I highlight those two periods: 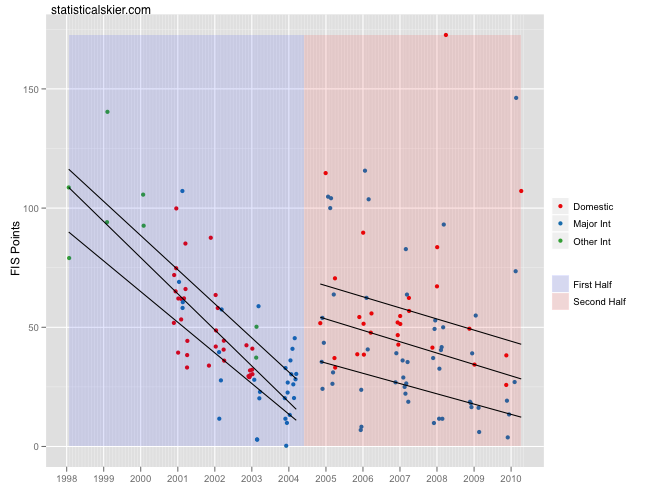 The lines are estimated quantile trends (25%, 50% or median and 75%).  That’s a pretty stark difference.  It’s almost as though something happened that caused Freeman to redo much of the training and development work he’d accomplished between 2001 and 2004.  It also appears as though the 2004-2005 season marked the start of Freeman’s “highly volatile” days, which he’s remarked upon himself (indicated by the quantile lines being more spread out).

The short version of this is that I’m fairly optimistic about Freeman for this season.  It seems like he might have clawed his way back to where he was in 2003-2004, despite his issues with consistency, and he’s had some promising indicators in a few time trials this fall.

Another reason for optimism stems from the fact that Freeman has reached the top five in a major international race precisely five times and every single one of those races was a 15km classic event.  I believe there are no less than three 15km classic races on the schedule this winter. 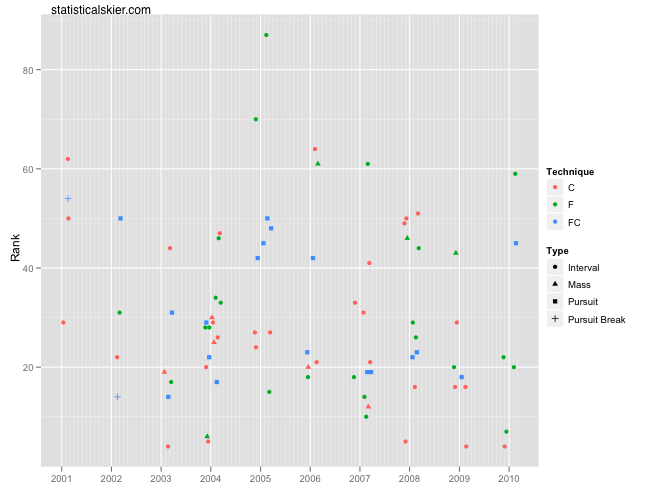 Note that I’ve switched to rank rather than FIS points on the y axis here.  It almost seems like Freeman was having more luck with skating between 2006-2007 and then things reversed between 2008-2010 somewhat, but that might be stretching the data a bit thin.

In any case, I’m betting that Freeman will crack the top five again this season in at least one of the 15km classic races.  As for a medal at World Championships, who knows?  That’s a tall order, but if he really does have his insulin dosing dialed in, I’d say the chances are better than in any previous season we’ve seen.