This is part one in a short series of season preview posts on USST athletes in which I’ll review each skier’s results to date and make some guesses about how they’ll fare in the upcoming season.  I don’t have any special insight into the future beyond my database of past race results, and I certainly am not using some fancy predictive model.  While I’ll likely support a fair bit of my guesses with data of some form, I obviously wouldn’t take any of my predictions to Vegas with you.  And of course, my guesses are just me being a cynical realist, not necessarily an expression of what I’d like to happen.

I’m putting Morgan Arritola and Liz Stephen into a single post since they’ve had quite similar results so far in their careers and they both focus mostly on distance events.  Let’s start off with a quick look at their results so far: 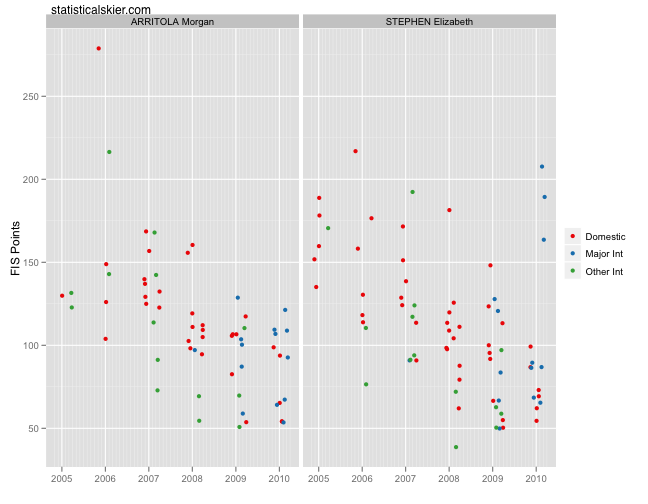 The colors are only a rough classification of races into major international (WC, OWG and WSC) other international (OPA, WJC, U23 etc.) and domestic (SuperTour, Nationals, FIS races, etc.).  Not all of the “domestic” races necessarily took place in the US, but you get my drift.

As you can see, their results have been pretty similar, at least in terms of FIS points.  Arritola probably had the better season last year, mostly due to a few slightly better races and fewer really slow races.  Stephen has mentioned in interviews I believe being somewhat overtrained (or something) which led to some disappointing results last year.  Presumably, she’ll adjust her training to address that this year.

Both skiers have basically topped out at around 50 FIS points, the lone exception being Stephens’ 3rd place finish at U23s a few years ago.  A little more worrying is that both seem to have stalled a bit over the past 2-3 seasons, in terms of improving.

It goes without saying that I don’t really know anything about their training, health, etc.  So, if I want to say something about how these two will fare this coming season I’m limited to examining data on how other skiers have fared with similar results.

As a simple example, we can take all the women who’s best result in a season is between 50-60 FIS points and then look at what their best result was the next season.  That will give us some sense of the range we can expect.  The following plot shows the results, by age: 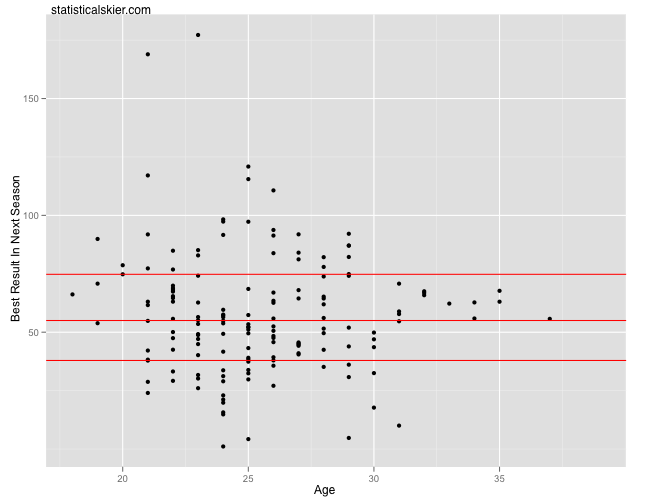 Each dot is the best result (by FIS points) of a woman who’s previous season best race was between 50-60 FIS points.  The red lines represent the 20%, 50% (i.e. median) and 80% quantiles.  I plotted these by age, because as you can see, once you get past the age of 30 (like me!) you see some strong age dependent effects.  If you’re north of 30 and your best race was 50-60 FIS points, it’s unlikely you’re going to see much improvement.

Otherwise, we see that (unsurprisingly) the median result is to have your best race be basically at the same level as the previous year, between 50-60 FIS points.  There might be slightly more athletes that see an improvement between ages 20-25 than between 25-30, but it’s a very small difference.

Connecting all this back to a prediction for each skier’s best race this coming season by FIS points is tricky, since as I’ve discussed before there’s a huge discrepancy between mass start/pursuit races and interval start races.  If we ignore that for a moment, I’d say we’re most likely to see a modest improvement by both Arritola and Stephen this year, with both of them having at least 1-2 races closer to 40 FIS points.  Based on past experience (i.e. the data) it would be pretty unusual (but not impossible) for either of them to start pulling off sub-20 point races.

One interesting factoid I’ll point out is that of the 8 times these two ladies have scored World Cup points (top 30) so far, 7 of those races were mass start or pursuit races.

FIS point predictions are pretty weak, though, and certainly not very exciting.  So here’s my wild-ass-guess: Arritola and Stephen will continue their trend of skiing at about the same level.  Both will score World Cup points this season, but neither will break into the top 20.  All WC points they score will be in pursuits (which favors skating) and freestyle mass start races.

Ok, so that probably wasn’t a very bold set of predictions, but I can’t help it.  I’m a cautious guy.

Fueling on the Go