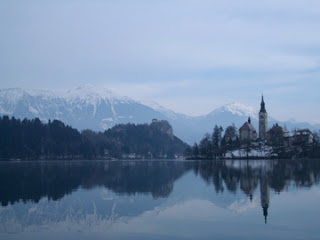 Hello from Slovenia! We arrived in Bled Monday afternoon and have been enjoying some sun and great skiing up at the venue in Pokljuka. Things got underway for the final pre-Christmas World Cup yesterday with the Individual races. Watching the men’s race before we left the hotel left me a little nervous. Many of the best men in the field had terrible days on the range. Our men were no exception, with the best shooting coming from Lowell Bailey with 5 penalties-not what you normally see in an Individual style race were each miss adds one minute to your time. The wind had been switching around a lot, and though some athletes were lucky enough to best the conditions and walk away with only a few penalties, not one man hit all 20 targets-nearly unheard of for this caliber field in this type of race.

Luckily, when we arrived at the stadium (a windy 30 minute drive from our hotel- thank you Bogus Basin for preparing me well to deal with winding roads to races and training!) the wind had settled a bit and was more consistent. There was still some gusting, though, and some swirling wind you had to be aware of especially in prone. I went off early with the top group of starters, which meant I had some great people to try and stick with and was able to see the level of where I need to be to win medals. It was tough to be passed by these girls, but I looked at it as motivating to see how long I could stay with them and where they would gain time on me-letting me know what I needed to work on. But the Individual race is usually won and lost on the range, and I was confident about my ability. With only one penalty, coming in the third stage in prone position, I knew I could have a solid day. As is my usual style, I had a great last loop after cleaning my final standing stage, and ended up placing 21st.

In less than a week I’ve managed two personal bests with two top-30 results. It’s really motivating to be shooting so well and see my skiing improve each week. And the Pokljuka venue is beautiful, so no better place to have some solid results! 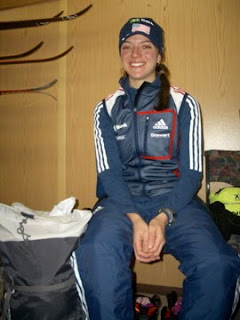 In the ski room post-race, and very happy with my 21st!

This weekend is the final two races before we break for the holidays. Sprint race on Saturday and a Mixed Relay on Sunday (featuring 2 women and 2 men it’s a really fun event). I’m looking forward to the races; knowing we have a nice break afterward allows you to really push through the weekend. Then I’ll be off to Italy for some relaxation, training and sun! I’m already heading in to Christmas with more World Cup points than my total from all previous years, which makes me very excited for the rest of the season…things have hardly begun!