I’ll have a separate post covering some of the North Americans tomorrow.  As usual, the choice of athletes to focus on is whatever strikes my fancy.  If you have suggestions/requests after each race, let me know in the comments of the race snapshot posts.

The first thing I want to note about Saturday’s distance races is that, for an interval start race, the results were slightly unusual.  Only slightly unusual for the men, but more so for the women.  On the men’s side, the field seemed pretty closely packed near the front, which is more typical of a mass start race.  For the women, we had another race with a handful of skiers way off the front created some interesting points situations further back.

Here, let me show you: 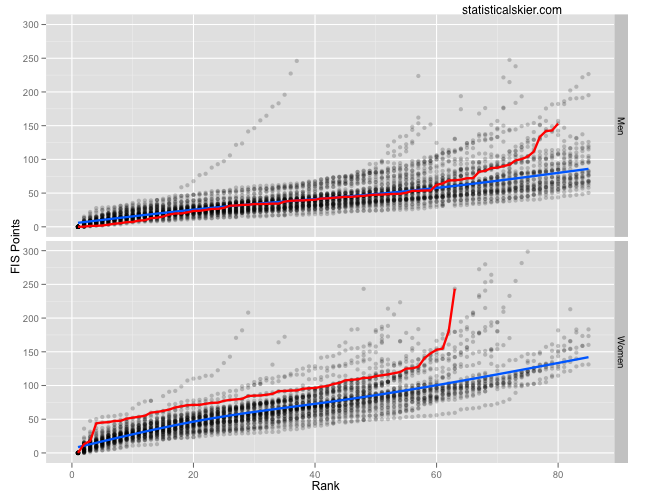 The red line is Saturday’s race and the blue line is the “average” over all 10/15km interval start races (WC, WSC or OWG) since 2003.  While there’s a fair bit of variation around the blue line from race to race, the relationship between rank and FIS points is often fairly stable.

You can see on the men’s side that the race was somewhat tighter than usual up front, with the red line trending somewhat below the blue one until around 20th place.  Of course, the women’s race was more obviously an extreme case.  I’m not trying to start the old arguments about FIS points here.  My point is simply that while FIS points work just fine “on average”, occasionally we need to be aware of scenarios like this.  (The season opener in Gällivare is another example, where Björgen also crushed everyone.)  It’s not that the points are wrong; they are accurately reflecting the percent behind the winner, which is what they are supposed to do.  But I’d suggest some caution in assuming some of these women had a bad race purely based on their points.

Ok, moving on to some individuals.  Alexey Poltaranin was the big winner in the men’s race, which came as a bit of a surprise to many people.  While he may not have been one of the favorites, Poltaranin’s a talented (and fairly young) skier who clearly has a preference for classic races: 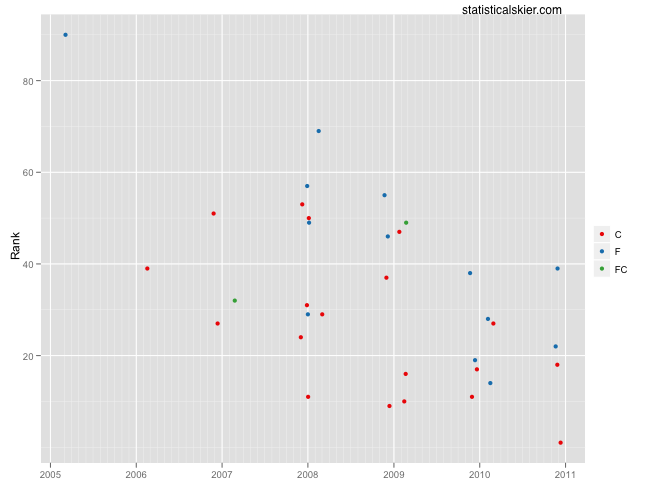 Sure, he hasn’t spent much time in the top ten previously, but this sort of thing is what happens on a competitive race circuit.  Guys like Poltaranin pop a good race while some others (Northug, Hellner, etc.) may not have their best days and voila!  Surprise victory!

I was excited to see Japan’s Masako Ishida in 6th place in the women’s race.  It’s always fun to see people from other countries mixing it up, although as an American, I’m somewhat biased on that score.  You think Poltaranin preferred classic races?  You ain’t seen nothing yet: 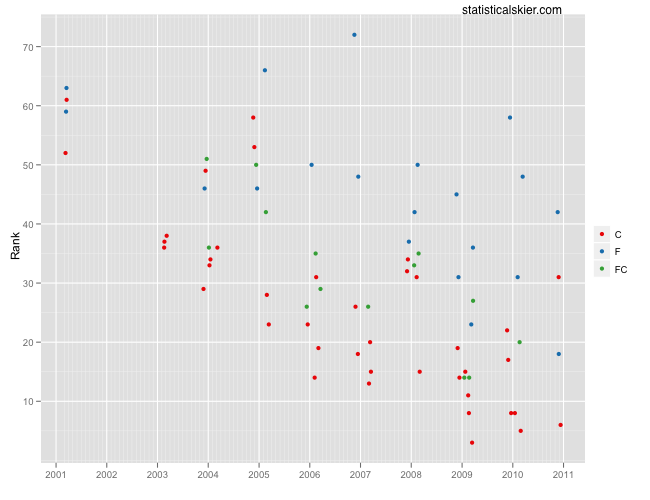 A woman after my own heart!  (I prefer, and have always been better at classic skiing.)  She’s had quite the mixed bag of results so far this season, but it really shouldn’t be much of a surprise to see her in the top ten in classic races.  She already has one podium, I wonder if she can pull off another this season?

One of my loyal commenters asked that I take a look at Finland’s Krista Lahteenmaki who is fairly young and also had a strong race, finishing 8th.  When I looked her up, it became clear that we shouldn’t have been too shocked, despite her young age: 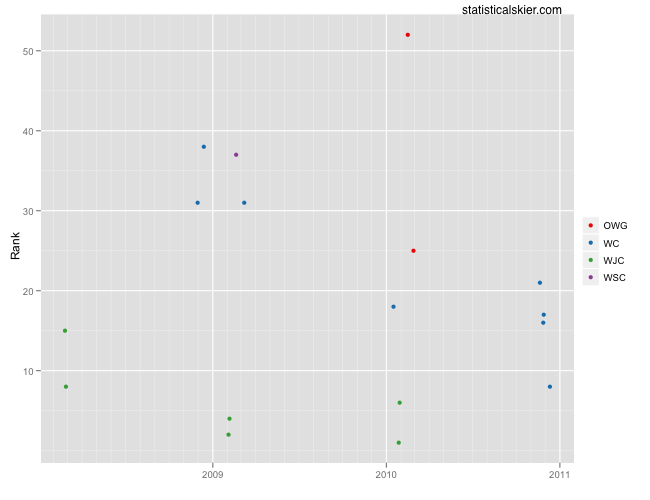 Note that I’ve mixed her WJC results in here, so don’t let that confuse you.  Not a lot of races (I have a few more FIS races that she’s done, but wanted to focus on just these) but heading in to Saturday she had a 16th, 17th and 21st.  She’s making a fairly strong transition from the junior ranks to WC action, clearly a skier to watch.

Prior to Saturday, Lahteenmaki had already racked up three finishes in the top 25.  A promising sign for the Finnish women’s squad.

Picture of the Weekend