Lenny ValjasDecember 14, 2010
Last weekend I Competed in the World Cup Sprint in Davos, Switzerland. I felt really good coming into the race. My teammate Phil and I had a great pre race interval workout earlier in the week, so I had a good feeling for the race. 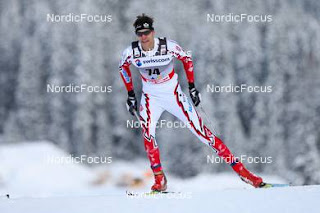 After just missing the top 30 in Dusseldorf last weekend I was determined to qualify today. I fought hard out there and was rewarded with a 22nd place finish in the qualifier. Phil finished just 0.03 seconds behind me in 23rd place! Chandra also had a good qualifier tying for 30th; unfortunately they couldn’t take both girls to the heats. Since Chandra’s FIS points were not as good as the other girls, she was forced to miss out on the heats. Not cool. 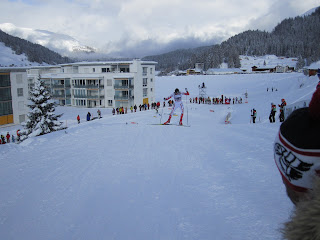 In my quarterfinal I was up against Dario Cologna SUI, Jesper Modin SWE, Anders Gloeersen NOR, Anti Saarepuu EST, and Harald Wurm AUS. I timed my start almost perfectly and tucked in behind the local Superstar Dario in second place. I skied the whole first lap in second place right on his tail. On the last lap I made a bit of a tactical error. I could hear Modin and Gloeersen attempting to pass me on the right. I should have shut the door on them and moved over so they would have been forced to try and pass me the long way. They both snuck by me putting me in 4th leading into the hill. All 4 of us were together coming into the last 150 meters. I sprinted my tired body as fast as I could but was unable to pass anyone. I finished the heat in 4th place. I thought my time was good enough for the lucky loser spot, but it turned out that a Russian skier from the previous heat beat my time by 0.3 seconds to claim the last spot in the semi final. 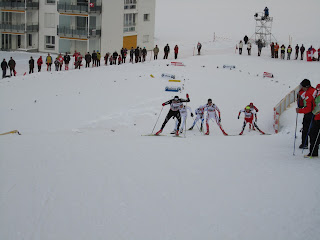 My final result on the day was 17th place.
Phil also skied a great heat and ended the day in 18th place.
The wax techs once again made my skis ridiculously fast. Thanks Guys!
My American friends had an awesome sprint day! Andy Newell was 13th, Simi Hamilton was 16th, and Kikkan Randall was 3rd! Congrats!
With this top 20 result, Phil and I have both qualified for the World Championships in Oslo, Norway later this year.
I have one more WC race here in Europe before I return home for Christmas. I am off to La Clusaz, France this thursday. 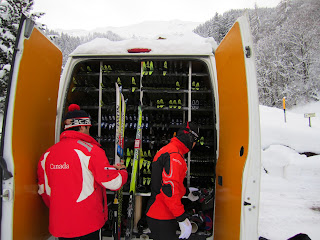