It was a pretty decent day for North America on Saturday with Kikkan Randall’s 2nd place, some solid performances by Chandra Crawford and Dasha Gaiazova (8th and 27th) and a mostly average race for Andrew Newell (13th).

Many thanks to Jan at WorldofXC.com for providing me with some data that I don’t usually have access to, namely the split times for all skiers in each round taken from the live timing site at FIS.  This will allow us to look a little more closely at how each skier did as they progressed through the heats.

First up the women: 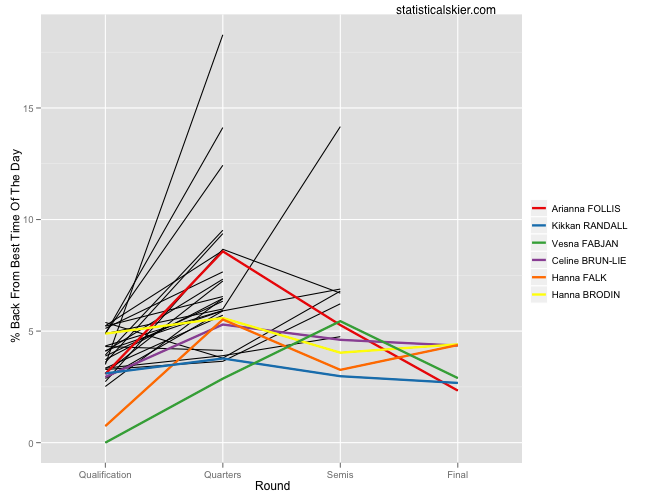 This should be fairly self-explanatory.  Each line is a single skier; if the line stops before the Final round, they didn’t advance.  The y axis is the skier’s percent back relative to the best time of the day across all rounds.  That way we can compare times both within and between rounds.  Also, I’ve obviously highlighted the top six skiers.

The lines shooting up very high are likely either skiers who crashed or were dropped and packed it in for the rest of the heat.

One thing that stands out to me is that how Arianna Follis managed to get such a slow heat in the quarters and then another fairly relaxed heat in the semis as well.  Keep in mind that while the differences in percent back here may seem large, the race itself was very short, so the time differences between a “fast” and “slow” heat might be only 5-10 seconds.  It’s been a while since I’ve skied as hard as I can for 3 minutes, so I don’t have a good sense anymore of what sort of difference that amount of time makes in one’s perceived effort.

In any case, Kikkan Randall skied very, very consistent heats.  A great sign, I think, from a fitness perspective.  A lot of the “luck” that crops up in sprinting comes from how the pace of your particular heats play out.  That’s something that’s at least partly out of any single skier’s control, although the ability to get in front and dictate the pace is probably pretty crucial as well.

One wonders whether the blistering times set down by both Fabjan and Falk in the qualification round hurt them later on (similar to Jan’s theory on Petukhov).

On to the men: 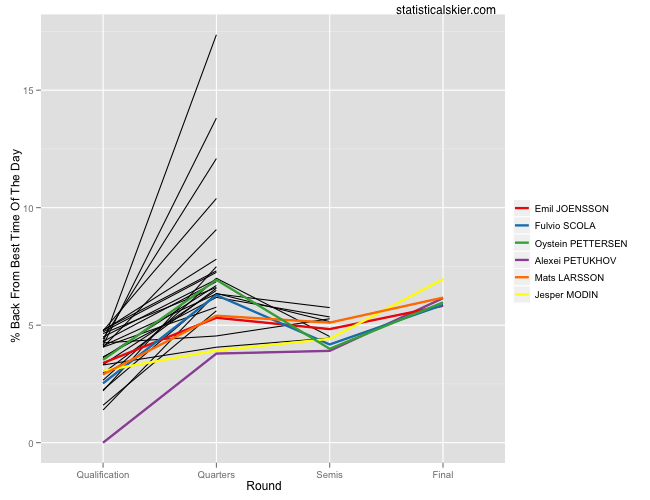 Evidently, quite a few more crashes in the quarters with the men.  (I didn’t watch the races.)  Or more skiers getting dropped and letting up?  In any case, their presence compresses the rest of the graph, so let’s zoom in a bit: 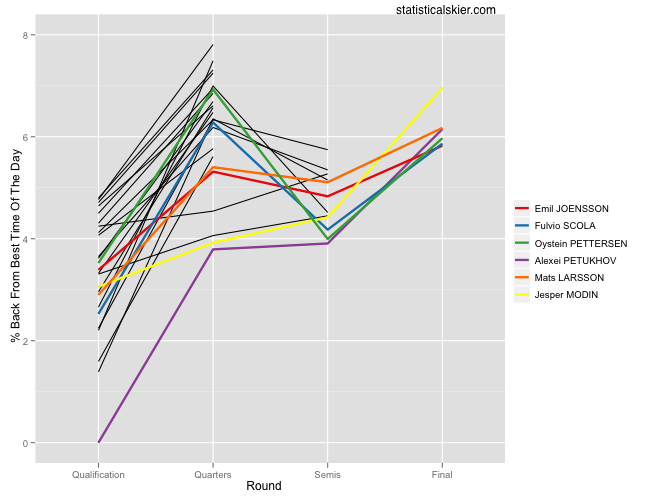 Interesting pattern here of slowish quarters, faster semis and then a slower final.  I’d would have guessed that finals would tend to be somewhat slower, since they’re going to be more tactical and athletes may be more cautious.  It would be interesting to see if that’s the case over a large set of races, although I’m sure it’s highly dependent on course length and design.

Petukhov certainly managed to lay down some fast times straight through the semis.  Even though the final’s pace was a bit slower, he may have sunk too much energy early on.  Again, sometimes that’s something you can control, sometimes not.

Modin clearly cracked a bit in the final relative to the times he’d been putting in the whole day.  Still, from what I’ve read, and looking at these times, I’m venture a guess that tactics trumped fitness to some extent in the men’s final.  If you watched the races, and I’m completely wrong, feel free to let me know!