Sorry for the delay in posting this update, the internet situation at our hotel in Düsseldorf was not good.
Our team left Kuusamo Thursday morning to race at the WC sprints in Düsseldorf on Saturday and Sunday. 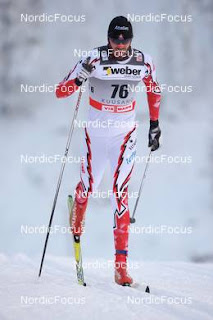 After I had gone through airport security, I had a bad feeling about losing my luggage. Finnair’s flight attendants and baggage handlers were on strike. I went back out through security and asked the airline to go and retrieve my suitcase, so that I could grab my ski boots. If I didn’t have my skate ski boots, I would have to miss the races. Size 47 ski boots are not easy to find. Our flight was delayed an hour from Kuusamo which made us miss our connection in Helsinki by 10 minutes! Unfortunately, there were no more flights to Copenhagen that day, so we ended up spending the night in an airport hotel in Helsinki.

The next morning, we caught an early flight to Copenhagen only to find out that our connecting flight to Düsseldorf had been cancelled. We were able to find a flight later in the afternoon. Instead of sitting in the airport all day, Brent, Chandra and I decided to take the train to Copenhagen to look around the city. We had a great day and time passed quickly. Eventually,  we made it to Düsseldorf, only to find out that I was right about about our luggage… our bags were lost and they weren’t able to trace them. Great! Less than 24 hours before the race and I had no clothes or ski poles. I had visions of skiing in my jeans.  The wax techs shared all of their training clothes and race suits so we could race. One of my ski bags with training skis and my skating poles was also missing. the coaches and I were not able to find poles long enough for me before the race started. I normally ski on 177.5cm poles for skating, but 172 was the longest pole the techs could find with such short notice. At least I had some poles. I would try to work with them. The worst part about losing my bag was that I also lost all my asthma medication.

During the warmup I could already feel the tightness in my chest. I frantically tried to find a puffer from anyone, but had no luck.

My qualifier started off very well, I intentionally started conservatively and planned to pick up the pace on the second lap. My asthma did not cooperate with my plan at all. My lungs did not take the intense breathing very well, by the end of the race I felt like I was breathing out of four straws.  My speed really suffered from the lack of oxygen. I felt like I was barely moving by the time I reached the finish.

The result was not as bad as I thought; I ended up just missing qualifying by 0.4 seconds and finished in 34th. It was really frustrating because I knew that this was the perfect course for me and I could have skied so much better if I had all my gear.
That afternoon the coaches went on a hunt to find me a puffer. Amazingly they found the same type that I normally used. I also spoke to the Estonian team to see if they had any long poles for me. One of the taller skiers offered to lend me his one spare set for the next day’s race. He told me that he was only helping me out because I am Estonian. I was pumped and ready to rock and roll in the team sprint the following day.
Chandra had an awesome sprint day finishing 8th Overall! Congrats!
Stef Kuhn and I were paired up for Sunday’s team sprint. In the team sprint each guy does three laps total, tagging off after each one. Stef started the race which meant that I was the anchor. Both of our first laps were pretty easy, the entire field stayed together and waited for someone to make a move. My second lap was faster for me. I made a few surges and made up a few positions. I tagged off to Stef in 5th position for his last lap. Immediately after I tagged off to Stef, a Norwegian skier broke a pole, which made the French skier swerve, causing Stef to crash. Just like, that we were almost in last. Stef was forced to ski the lap alone without the aid of the draft in the main pack. He tagged off to me in 19th position. I gave it everything I had, I was able to reel in three teams before the finish; finishing 17th. This was a tough one. We were in great position until the crash. The American team had similar troubles as well,  finishing behind us.
The girls team on the other hand had one of the best days ever! Dasha and Chandra were able to stay on their feet and benefited from a couple late crashes to finish 3RD!!!!
First World Cup medal for Canada this year. Great Job! 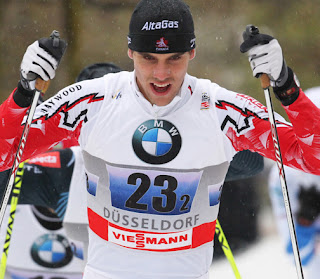 I am now in Davos, Switzerland preparing for this weekend’s skate sprint. I am ready to redeem myself. Some great news for me, while checking in at the Düsseldorf airport yesterday, Stef noticed my duffle bag sitting in a pile of luggage in the airport! So lucky! I am the only one to receive a bag thus far, there are still 7 missing including all of our ski poles…

Hope the next WC races go more smoothly than they did in Düsseldorf.  Personally, I can’t wait to hit the start line in Davos on Sunday.

When the Town Fits…