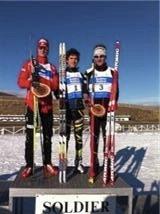 3rd Place in Park City Continental Cup! 1st Geoffrey Lafarge (France)2nd Joergen Graabak (Norway)3rd Taylor Fletcher (USA)
Hey everyone, Sorry for not getting updates earlier, but I have been pretty busy and trying to focus as much on the Competitions as possible. I first went to Kuusamo, Finland for the first World cup. I was super excited being there and starting on World Cup. The competitions were not the best for myself, but i was not expecting to do anything special. I had some pretty good Competition jumps for myself, but I felt that my fitness was not to great, so I didn’t have the best races! It was -20* C in Kuusamo, so it was very hard to race with that cold of snow and air.

Next we Moved back to Lillehammer for the second set of competitions. There I Felt a little better on the jumping but had some back luck with the conditions. The racing felt a little better, but still wasn’t were I was hoping to be at. We had some fun in Kuusamo and Lillehammer, and was excited for my brother, being able to score points 2 of 4 competitions in the period.

After that I our team headed back to Park City, Ut to take a short rest before heading to Ramsau, Austria. There was a Continental Cup going on at the time. The first period consisted of two races in Steamboat Springs, CO and two in Park City, UT. Todd Lodwick won the first two in Steamboat with a good size margin over the other skiers. I was asked if I wanted to ski on of the days in Park City, and feeling well, I said Yes. So the first day I helped out the team and took some fore jumps. Billy Demong skied the first day moving up 1 minute 40 seconds to finish 5. I got to ski the second day in park city. After not having my best jump, I thought I would be a little out of the podium, but it ended up being hard conditions for everyone. Teammate Brett Camerota won the jumping and I came in 23rd 1 minute and 22 seconds behind him. I knew I was skiing better and having scored a podium for that position last year in Lake Placid, I knew I had a chance. I started out pretty slow since the conditions were very soft and slushy. I followed the guys I knew I needed to follow and started to pick up my pace after each lap. Around the end of lap 3, I was only about 30 seconds from 1st with a pack of about 4 skiers. We all worked well together to try and gain more time. At the start of the 5th lap we caught the leaders the pace really started to pick up. Skiing my hardest to the finished I was able to come into 3rd at the finish giving my all.

We are now in Ramsau, Austria for the next set of world cups before the Christmas break. We Arrived here on the 14th for Park City. We had a jump session today as well as Intervals, and I can comfortably say I am excited for the weekend coming off a good result in Park City. I will update after Offical training and as well on Sunday after the competitions.