This is a bit after the fact, but I can’t let good data go to waste.  Once again, thanks to Jan from WorldofXC.com for providing the data on times from the heats.

Ok, let’s get in our time machine and blast our way back to Finland for the women’s sprint: 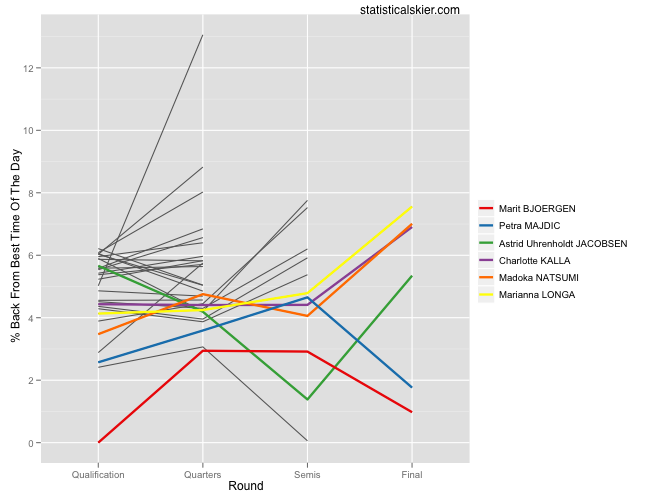 All of the percent back values are calculated based upon the fastest time of the day from any round.  Marit Bjørgen certainly smoked everyone in qualification.  This should serve as a good reminder to folks who think it’s not a good idea to kill yourself in the qualification round.  That’s only really true relative to the sort of efforts you personally can put out.  Bjørgen in this case doesn’t pay a huge price for laying down a monster time in qualification because presumably her fitness level can handle it.  Qualifying with a fast time may or may not be damaging, depending whether you’re fit enough to handle it.

Moving on….that’s Justyna Kowalczyk failing to advance from the semis despite a really fast heat, as she was disqualified for skating around a turn.  Astrid Jacobsen seemed to be coming on strong all day posting successively faster times in each round, until she faded a bit in the final. 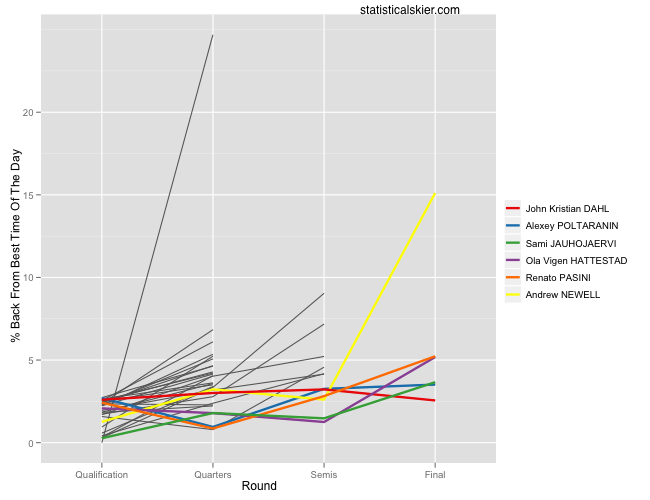 Yikes.  Someone had a rough day in the quarters, no?  That would be Finland’s Niklas Colliander, I believe.  Let’s try to get a better view of everyone else by zooming in a bit: 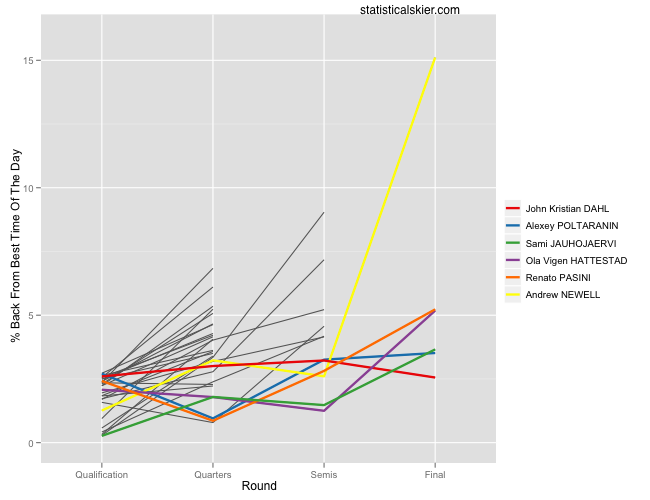 John Kristian Dahl managed to get through each round without being forced to put down a super fast time, so props to him!  Andrew Newell seemed to be getting away with that as well, but then the wheels just came off in the final, for whatever reason.

Once again, the final seemed a bit slower than many of the earlier rounds.  Again, I think that’s inevitable both for tactical reasons and you’d expect people to slow down somewhat after three maximal efforts.

NorAm Series Poised to Kick Off In Soveriegn Lake