Saturday was the first long mass start race of the World Cup season in La Clusaz, France, and along with mass start races come difficulties in measuring performance in a sensible manner.  The women’s field didn’t help matters by having the top three ski away from the field.

So you end up with some odd stuff, like Elizabeth Stephen and Morgan Arritola have seemingly some of the better races of their careers (18th, 19th) with FIS points near 100, which would only just barely put them in the top ten in last weekend’s Nor-Am race in Canada.  As I’ve pointed out before, over the course of a season or an entire career, these sorts of things tend to even out and not be such a problem.  But in situations like this, where we’re looking at a single race and we want to know what it means, it’s a problem.

One way we can get around this is by comparing a skier directly to the other skiers in this particular race, using a percent-back difference plot looking only at mass start and pursuit races.  The fact that the entire field’s FIS points may be inflated (or deflated) artificially won’t matter, since we’ll only be looking at the relative differences between a particular skier and the field.  Sometimes we get a different answer, sometimes not.  As an example, let’s look at a handfull of skiers who appeared to have particularly good or bad days on Saturday. 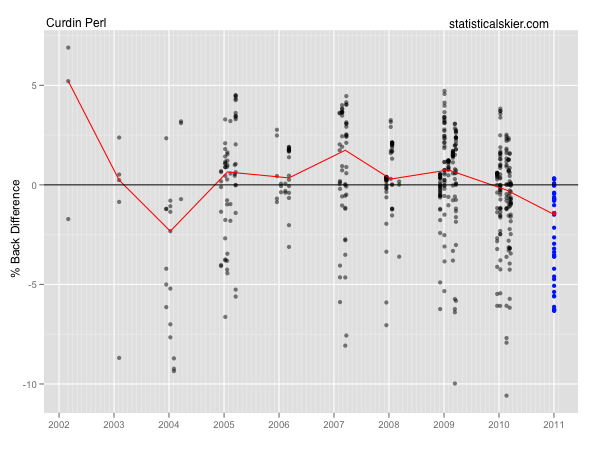 Compare this with how his race looks in my snapshot graph.  In that version, Perl had a career race, as the black bar represents the middle 50% of his results over the past several years.  While the percent-back difference plot above suggests a good race, it doesn’t look mind-blowingly good.  The difference in percent-back between Perl and the other top 40 skiers or so is modestly better than last season.

Another skier who seemed to have an unusually good race was Sweden’s Daniel Rickardsson (who also, I believe, is also more known for his classic skiing, but I haven’t checked that): 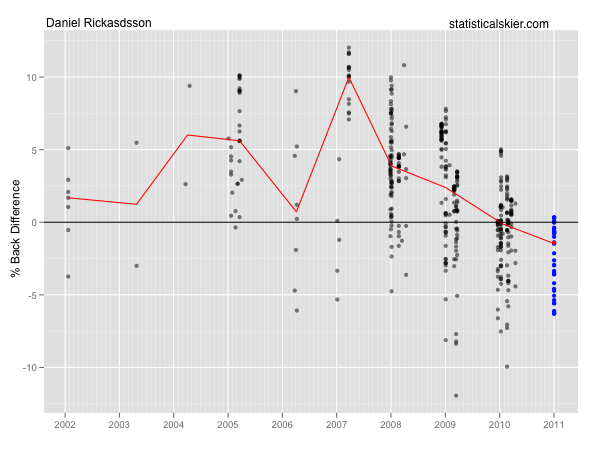 Once again, compared to how he fared against these specific skiers overall last season, this represents a good, but not surprisingly good race for Rickardsson.  However, the further back in time you move the comparison, the more impressive the race looks.  Saturday’s results was significantly better than 2008-2009 and dramatically better than anything he did in 2007-2008.

Next, let’s look at some women who seemed to have particularly bad races, starting with Riitta-Liisa Roponen: 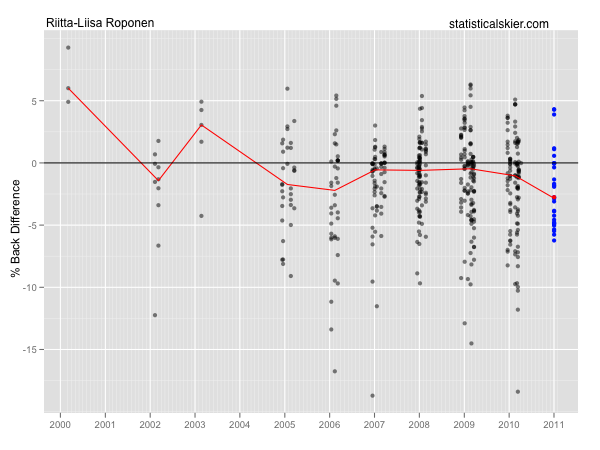 Weren’t expecting that, were you?  That was actually a fairly strong race for Roponen, I think, despite what you might assume just by glancing at the FIS points.  Sure, Björgen and two others skied away from her more than she’d like (several blue dots up near 5%) but compared to the rest of the field, she did fairly well.  Evidence, perhaps, that Roponen didn’t ski badly, but that the top three women happened to ski exceptionally well.

Another good example of this sort of phenomena comes with Therese Johaug: 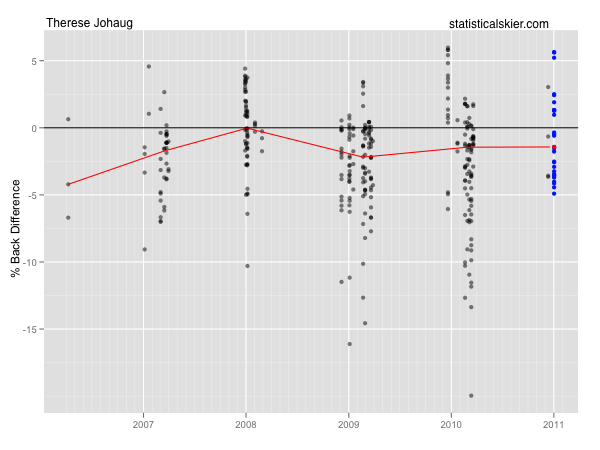 This seems like an average to slightly below average race for Johaug when comparing her to the entire field.

My point, as always, isn’t that there is necessarily a “right” answer about whether someone had a good/bad race.  If all you really care about is how far behind the winner you are, then FIS points will give you the right answer.  But it’s possible to have a good race and still be a long way behind the leader because ultimately you’re racing against everyone, not just the person who ends up winning.  So the more ways we have to look at a result the less likely we are to miss something important or interesting.