Just as I did yesterday, let’s take a closer look at the results form Saturday’s World Cup mass start race in La Clusaz, France, this time focusing on the North Americans.  As I discussed yesterday, we’re going to use percent-back difference plots from mass start or pursuit races to evaluate each skier’s race, since the FIS points awarded in mass start races can be a bit misleading.

Starting off with the Americans, Morgan Arritola: 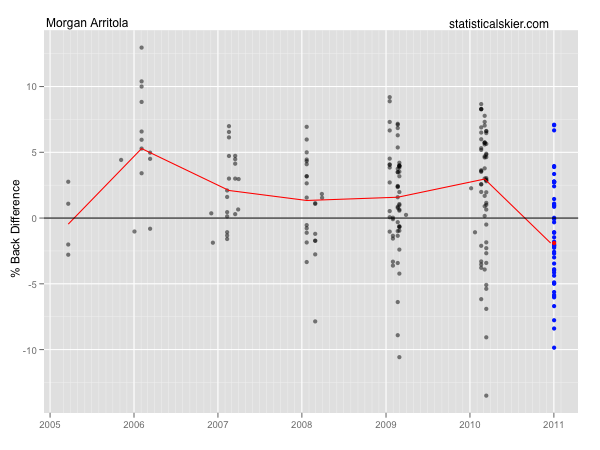 Both Arritola and Stephen seemed to have excellent races if you go by their place (18th, 19th) but pretty terrible races using FIS points.  Clearly, the FIS points are misleading in this case.  While the entire range of dots from Saturday’s race (blue) doesn’t seem markedly different than last season, what interests me is the median (red), which was almost 5% points better in that race than what Arritola typically managed last season (or ever, quite frankly).  And if you think that’s a big jump compared to last season: 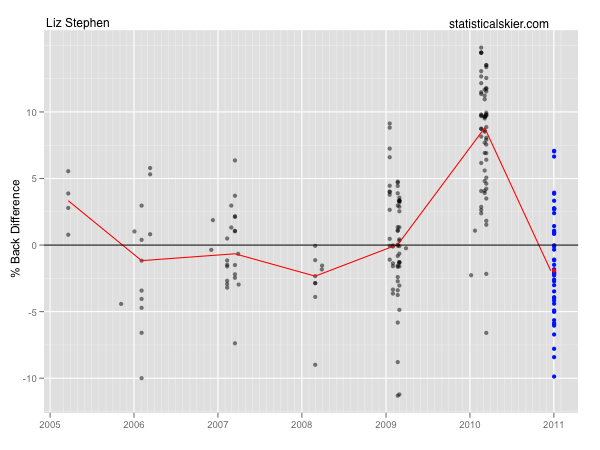 Granted, this is looking only at mass starts and pursuits, which happened to coincide with some truly horrible races for Liz Stephen last season.  But Saturday’s race still looks about as good, or slightly better than what she was managing the previous two seasons.

Kicking off the Season in B.C.