Continuing on from my last post on North American distance skiers, let’s jump right in with the sprinters, starting with the men: 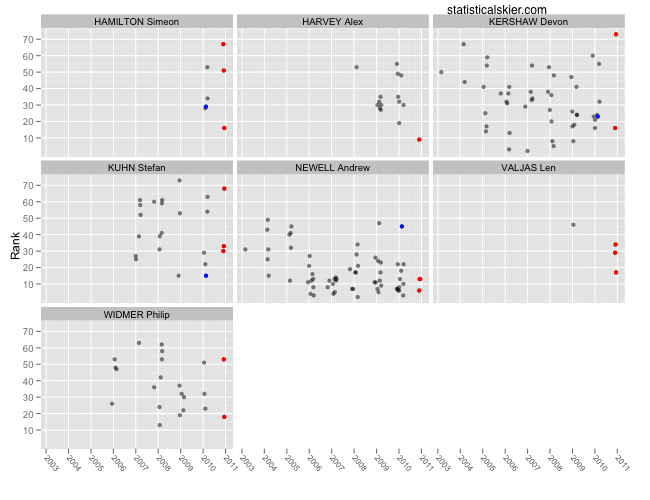 No fancy metrics here, just what place people finished in.  Once again, red is this season, blue is last year’s Olympics.  Alex Harvey’s sprint race in Kuusamo was unusually good for him.  Simi Hamilton had one excellent race and two pretty bad ones, although he’s been struggling with a leg injury for a while.  Stefan Kuhn hasn’t really put one together yet, but his two results around 30th aren’t exactly atypical for him so far in his career.  Kershaw had a strong sprint result in Kuusamo and then an unusually bad one.

Len Valjas certainly had some promising results, but then, we don’t have much to compare that to in terms of data.  Phil Widmer had one pretty bad race and another excellent one.

Andrew Newell is the most consistent of these guys, at least in terms of putting himself in the top 30 or top 20.  People keep waiting for Newell to put together a podium finish again, but keep in mind that his sprint results so far this season are right in line with how he normally does.

As for the women: 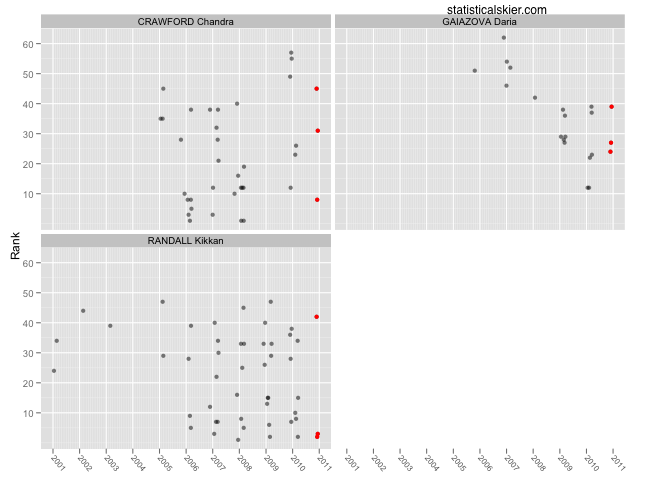 For the sprinters, looking at only the early season results didn’t turn out terribly interesting, so I’m going to skip those.  However, I will note that Andrew Newell has never, to my knowledge, made the finals in a WC sprint race before January.

I began the distance version of these posts with a discussion of performance measures in XC skiing.  I noted that in this sport we have a tendency to pick out people’s best races and treat them as indicative of how they will ski in the future.  But that’s at least partially crazy, since no one can perform at their very best every single day (or at least, the people that can are very, very rare, even among elite athletes).  As a quick example, over the past four years the middle 50% of Kikkan Randall and Andrew Newell’s WC sprint results have been (7th,33rd) and (7th,18th) respectively.  Half the time, these skiers have ended up in these ranges.  That’s a much better indication of how they will “typically” ski in the future.

Of course, if Randall continues to pump out podium finishes, her middle 50% will start to shift downward to reflect that.  But until then, we shouldn’t be disappointed if she fails to make the finals several times over the rest of the season, since that’s hardly unusual for her.  Similarly, Newell’s results so far may not be what people are hoping for (i.e. podiums) but he hasn’t exactly been off his game compared to his past performances.  It’s all about expectations.