Back in September I wrote a post looking at the supposed woes of Norway’s male distance team.  The bottom line was that, yes, by various measures things haven’t been looking as good lately for the Norwegian men’s distance squad.  With the first period of racing completed, and more rumblings in Norway about their poor performance, I thought it would be a good idea to revisit and update my previous post.

As before, I’m going to avoid fancier metrics like FIS points and stuff.  So here’s an updated graph showing the number of athletes Norway, Sweden and Russia have placed in various groups, per race, over time: 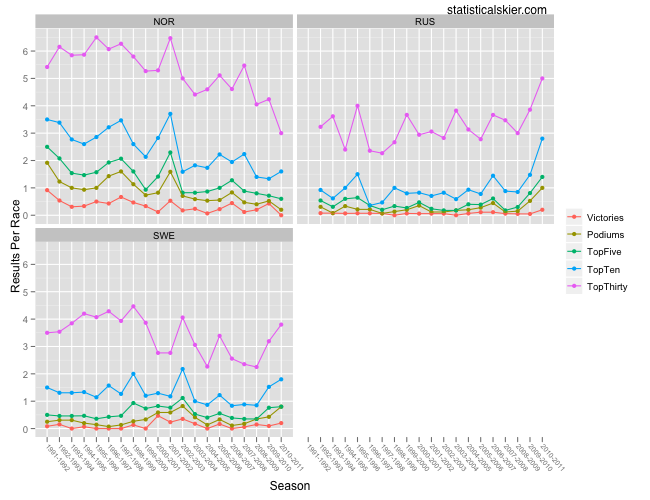 Keep in mind that the 2010-2011 data is based on only a handful of races so far.  Just to be clear, the y axis is the average number of athletes each nation puts in the top thirty, top ten, etc. over all the distance events that season.

Norway’s decline has been accompanied by resurgences in Sweden and Russia over the last 2-3 seasons.  And yes, the downward trend does seem to be continuing this season for Norway, although until recently they have been without their best skier, Northug, and the season is far from over.

Of course, another complaint I’ve heard that’s making the rounds in Norway is that they’re essentially a one man team, Petter Northug.  There’s certainly some truth to this.  Looking just at podium finishes, Northug accounts for all of them since 11-21-2009, when Ronny Hafsaas, a Norwegian biathlete, shockingly won the WC opener last season.  If you prefer to spit in the face of all your biathlon friends and claim that that “doesn’t count”, we have to move back to 2-14-2009 when Jens Arne Svartedal was second in a 15k classic.  (Martin Johnsrud Sundby was also 4th that day, but who’s counting?)  Since Northug’s first WC distance podium in 2008, he’s accounted for 16 of Norway’s 20 podiums.

Of course, it’s not like Norway has completely fallen off the cliff in a relative sense.  So far this season, only Sweden and Russia are averaging more skiers in the top 30 and the top 10 than Norway.  And if there’s a glimmer of hope it’s that Norway’s average number of people in the top ten is actually up slightly so far this season compared to the last two.  Not much of a glimmer, maybe, but it’s something.

These sorts of discussions always make me wish I had a time machine.  There’s just no way to know for sure if today’s Norwegian men are actually slower than those from the glory years in the 1990′s.  Maybe the Norwegian men are slower now, or maybe it’s just that a bunch of other countries have produced faster skiers then they had been.  No way to tell for sure without a time machine.