This is a follow-up post to an earlier entry where I noted an off-hand comment by US coach Chris Grover that when Kikkan Randall qualifies in the top ten in a sprint race, that this is a good sign that she has a good chance of making it to the finals.

I looked at some data and concluded that it mostly supported his claim, but that the sample sizes were small enough to not mean much, from a statistical point of view.  It was suggested in the comments that I look at this overall, for all skiers and see what, if any, relationship there might be.

What we’re interested in here is in quantifying this somewhat arbitrary, but interesting, cutoff of finishing in the top ten in qualification.  First up is a modified version of the plots I made for Kikkan Randall and Andrew Newell in the previous post: 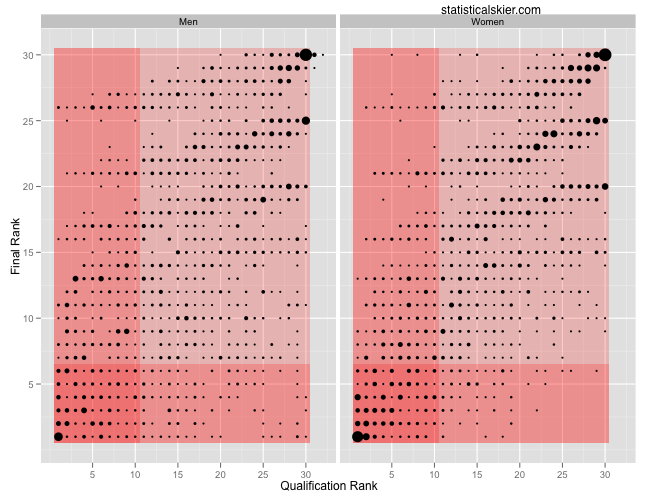 This covers all sprint races since 2005-2006.  I’ve blocked off the various regions using some overlapping rectangles to indicate the top ten in qualification and the top six in the finals, and the various combinations of those two conditions.  The size of the dot represents how often that particular combination of ranks occurred across all athletes.

There are a few rare instances where someone qualified above 30th but eventually made it into the top thirty.  This is due to the occasional disqualification or dropping out prior to the heats.

The somewhat boring formal statistics going here is that we’ve defined two binary variables (top ten in qualification or not, and top six in final rank or not) and the question is whether there’s a relationship between the two.  There are all sorts of ways you could approach this (two-way tables and chi-squared tests, ANOVAs, generalized linear model, etc.) but I’m not going to bore you with the details.

This also provides some useful context for the equivalent numbers for specific skiers.  For instance, the same proportions for just Kikkan Randall are 0.636 and 0.053.  Similarly, the values for Andrew Newell are 0.257 and 0.034.  (Remember, though, that those are based on very small sample sizes, for statistical purposes!)

Why are the Bathrooms at Ski Trails Labeled "Men" and "Women?"