As I was perusing some of the other assorted race results from last weekend, the FIS races in Norway caught my eye.  Of course, most of the press went to Petter Northug, with his victory in Saturday’s 30km skate race, presumably indicating that his fitness is returning.

A little further down the results sheet, but not too far, was Great Britain’s Andrew Musgrave in 6th, around 52 seconds behind Northug, good enough for around 26 FIS points.  He had some good results in November as well, so I thought it might be fun to take a closer look.

First of all, here’s a look at all the distance races I’ve got for him: 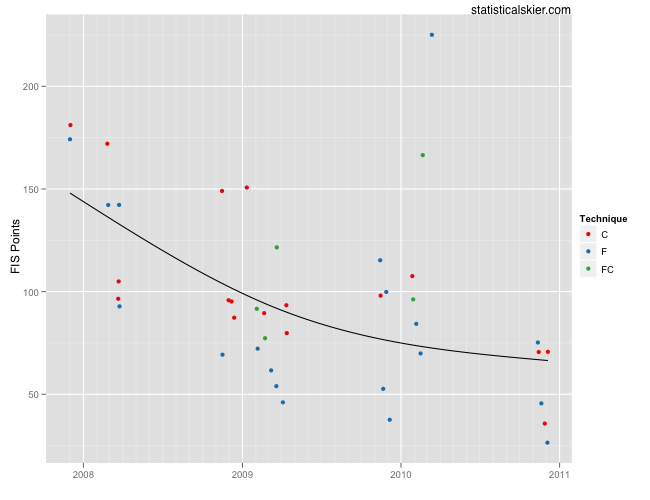 Saturday’s 30km skate race is the blue dot all the way down in the right hand corner, easily his best result, measured by FIS points at least.  I highlighted the technique of each race to point out that Musgrave seems to have had an affinity for skating over classic races.  I point this out mostly to say that Musgrave’s performance on Sunday in the 10km classic seemed like quite a let down after the day before (33rd, ~70 FIS FIS points), but that’s at the high end of his classic results from the past two seasons.

FIS points are an admittedly crude measure in this instance, so let’s look at a percent-back difference plot of Musgrave versus the top 40 from Saturday’s 30km skate race: 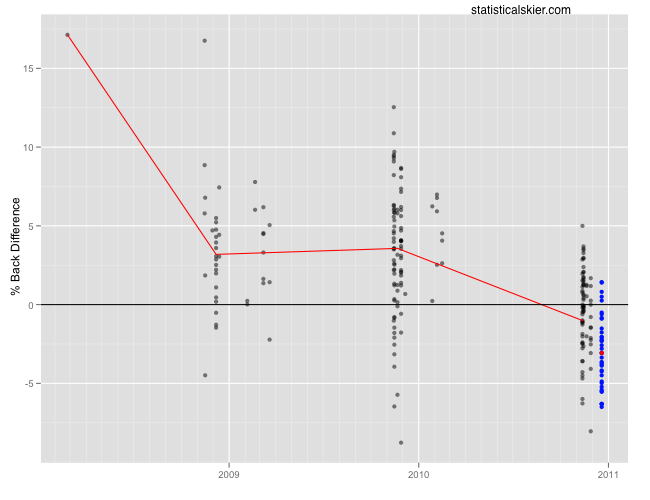 I’ve tweaked this graph format a little, hopefully for the better.  As always, each dot represents an instance where Musgrave raced against one of the top 40 finishers from Saturday’s race.  Values above zero mean they beat Musgrave that day and vice versa.  Saturday’s results are in blue and the red line represents the median for each season.

I added a red dot for the median percent back difference just from Saturday’s race, to aid in comparing his performance that day to the past.

First, we can see that Musgrave has indeed stepped things up quite a bit so far this season.  Also, Saturday’s race was not just good relative to his career, but quite good compared to just this season as well.  One of the things that I find intriguing about him is that he’s still only 20 years old, I believe.  It’ll be interesting to see where he is in 3-4 years if he manages to keep this up.