Those Finns are Matti Heikkinen and Krista Lahteenmaki, of course, and I’m mostly referring to distance races: 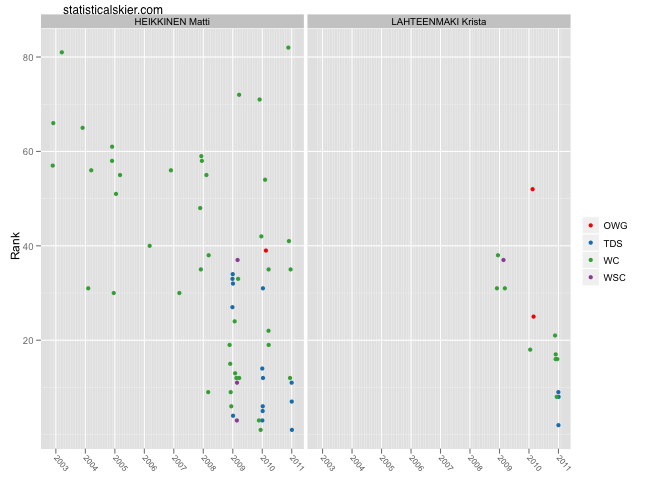 I actually made this graph prior to today’s race, so keep that in mind.

Simply using finishing rank for each athlete paints an interesting picture.  The first thing I want to note is that Heikkinen’s results this year so far are quite consistent with someone skiing into form as the season progresses, although it’s hard to tell from the compressed time scale in this graph.  So far this season he’s finished 82nd, 41st, 12th, 35th, 11th, 7th and 1st, in that order.

I suppose a naysayer might point out that the latter bit of Heikkinen’s improvement may well be due to the changing tactics that take place during the Tour de Ski, as top skiers (a) become fatigued and (b) focus on maintaining their overall standing rather than trying to win each individual stage.

Or maybe Heikkinen was just planning on focusing on the Tour all along, so he’s just peaking for this event.

In a larger sense, I’m intrigued by what happened to Heikkinen between 2008 and 2009.

Lahteenmaki is young and simply on fire.  With each passing race it seems less likely that this is just a fluke, and more likely that she’s someone to watch out for over the next several years.