This weekend was the 4th Biathlon NorAm of the winter.  The races were held in Jericho, Vt.  Results from the weekend will be available at: http://www.eabiathlon.org/

Antoine turned in a strong performance on the second day and he left the race with a great message! 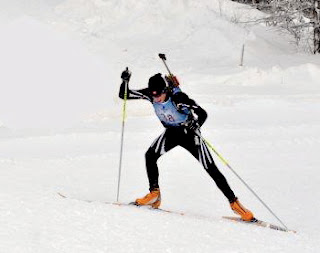 Just a quick word to let you know I got my first NorAm podium of the season, finishing third in today’s Pursuit race.
I was starting way behind as I finished 12th yesterday in the Sprint. So I had one of my best race ever, shooting 16/20 and skiing really fast!!

I shot only 2/5 on the first prone, which was really disappointing and I thought that I should just ignore it and stick with my race plan. I then shot 4/5 on my second prone and cleaned my two standings.

It was a really cold day and everyone was having a hard time skiing and shooting. I never gave up even if after the first shooting I knew I was far behind. I have learned a really important lesson today of never giving up. The race isn’t over until it is! 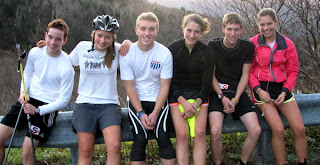 Antoine at the top of App Gap with some of the team earlier this fall.  Good to see the training paying off!  Also racing from the Valley was Nathanael Kuzio from Moretown.

Peaking for the Big Race