It’s always nice to see my countrymen (and women) skiing fast, so it’s been fun to see Lowell Bailey and Laura Spector posting some good results on the IBU World Cup scene over the past several weeks. Let’s just check in and see how these results compare to their past: 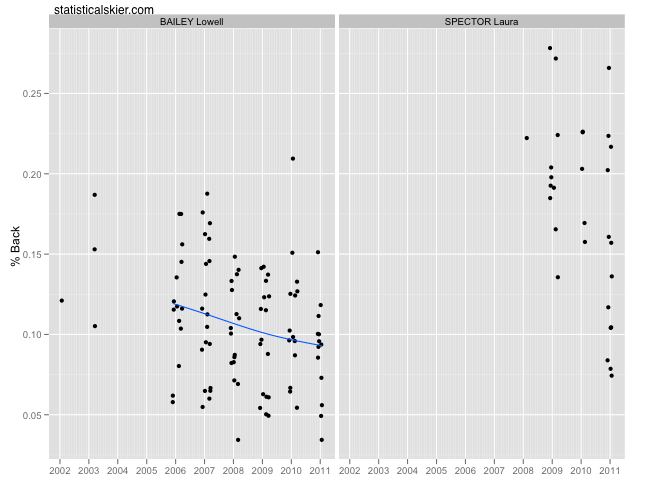 These are only “major” races (WC, OWG and WBC) and only Bailey had enough seasons under his belt to warrant a trend line. For Bailey, his improvement is probably as much from a reduced number of bad races as it is from an increased number of good ones. Spector, on the other hand, has simply posted half a dozen races that are as good or better than anything she’s done in the past.

Unsurprisingly, both of these athletes seem to have improved their shooting over last season: 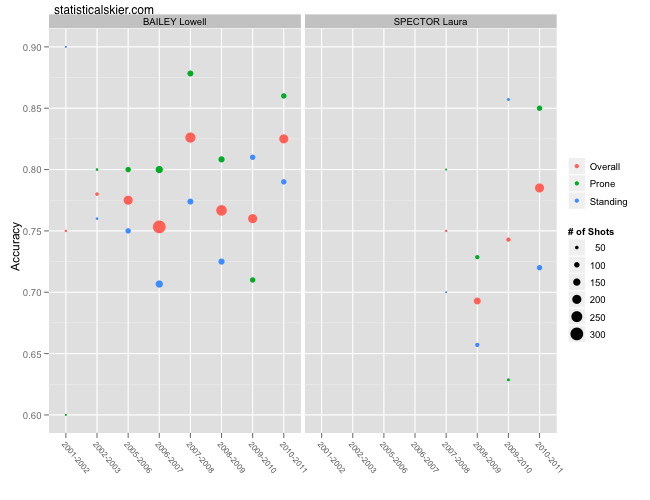 Of course, in Spector’s case, the sample size for her shooting prior to this year is fairly small. Both Bailey and Spector did actually shoot better standing than prone last year (unless I’ve messed something up, which I’m fairly sure I haven’t), which strikes me as fairly unusual. How unusual that is is clearly something I’m going to have to investigate further.

In any case, both Bailey and Spector are clearly seeing a sizable jump in their shooting. Bailey hasn’t shot this well since 2007-2008, which coincidentally was the last time he had a result well below 5% back.