Sadie BjornsenJanuary 21, 2011
This years U23 and World Junior pre-camp is in Vierumaki, Finland– a “National Sports Institute” about 25 miles outside of World Cup venue, Lahti. For the past four days, we have all been trying to figure out what exactly goes on in this little “village” we are staying at in the middle of nowhere. The trails are great, rolling and flat- perfect for keeping the jets firing low before the week of Championship races next week. From what we have concluded, this seems to be a popular summer resort where people come to golf. With the trails winding in and out of the golf course, and all the surrounding condo’s, golfing must be the main focus. There also seems to be many students running around that appear to be involved in various sports while also taking classes. From the looks and sounds of it, skiing, swimming, track, maybe gymnastics… body building… who knows! 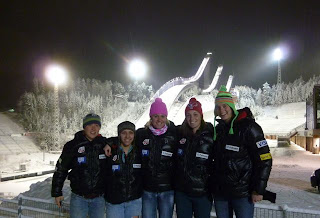 Night skiing in Lahti is awesome!

This is my sixth World Junior/ U23 trip, but this is the first time we have ventured up to the northern scandinavian countries, so this is a bit of an exciting change for me. There are for sure some differences. The food is a bit different… they like their stinky fish, orange potatoes, reindeer, and their bread and butter. Even more than that, they like mixing all of that together and making a wonderfully scary looking dish. From what I can tell, Finish people are very helpful, and friendly, but they don’t smile much. I have heard from some of the junior girls they are having a competition to see how many people they can get to smile back at them. 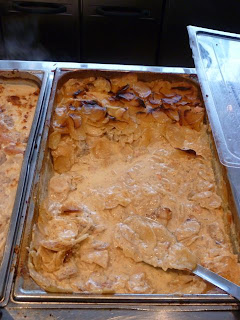 Delicious mixture of food for lunch!

Last night we had our infamous Name Game after everyone had finally arrived in Europe. There are some new faces on this trip, which makes this game all the more exciting. I learned some fun stuff- turns out Amy Caldwell has a pet that resides in a separate state from her home. David Norris seems to have had a crush on Amy Glen before ever meeting her. Ida Sargent talks about beating off dinosaurs in her sleep, and Tad Elliot has a hot younger sister. 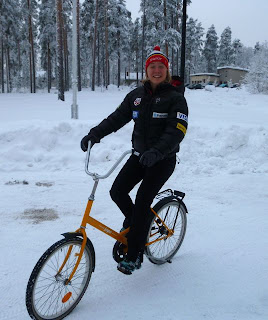 Ida steals a bike
Today we headed up to Lahti to ski on some of the World Cup courses, as most of us had some sort of intensity workout. If you haven’t seen hills before, I suggest taking a sunday stroll around that thing! It makes Yellowstone look like peaches comparatively! There were lots of different things going on out there though. Some sprint simulations, speeds, L4 intervals, drop-ins, L3 work, pursuit change practice and much more. I can tell you for sure, there was no easy skiing going on though. Aside from Fish, who was video-taping, I think everyone else got a good chance to shake the legs a bit! 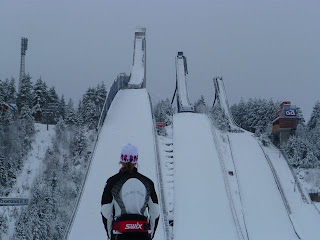 Them breakfast Wheaties didn’t quite give me the confidence to fly today… another day! 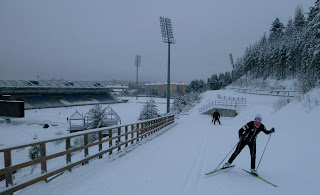 Skiing out of the Stadium- check out that stadium behind me!
The Lahti stadium is like the Mecca of skiing. It is incredible. Based around the three ski jumps towering above you- you feel like you are in a movie. The stadium sits in the middle of a huge set of bleachers on either side, and climbs out in two different directions- both visible to the spectator in the stadium bleachers. I would love to do a race here- I bet the fans are incredible! 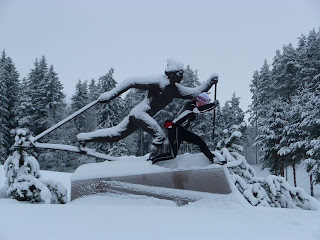 Out-lunging the queen of Lahti
We are staying in the same hotel as the Canadians for this pre-camp, so we challenged them to a bowling tournament a couple nights ago. I have two words… WOW and wow. There are some people on this team that should stick with their sport. But there are some on this team that ROCK at bowling. It was insane! After some steaming, competitive matches- I do believe the Americans came out ahead! 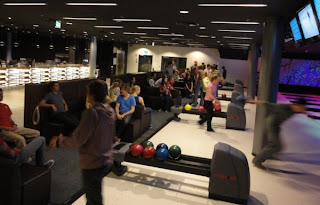 Bowling Tournament- Reese H. photo
We are keeping ourselves entertained though, and thats whats important! Spirits are high, and people are stoked! As the races approach quickly, everyone is dialing down their training- and getting ready to throw down. I think we have the potential for something sweet to happen this year. In the meantime everyone is training well, eating good, and staying healthy! 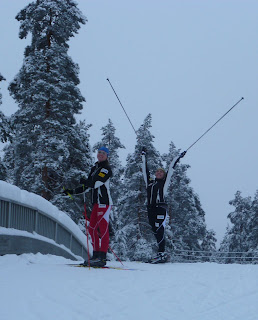 Kinzey and Joanne smiling away

Sunday we make the trip over the Otepaa, Estonia- which includes a two hour boat ride over the Gulf of Finland. From there on out its race prep, and then the racing. YEHAAA!