Last week was a great validation of what I’ve known about my abilities as a skier; as Torin so aptly put it after Saturday’s race, to pop a top-10 result at Nationals after spending all fall fighting off mono and not training is no mean feat.

After the races last week I came down with a rather nasty cold bug and we retired to Torin’s family estate in the Green Mountains of Vermont. I took three days completely resting and pounding some zinc and vitamin C, and Scott and I decided the best plan of attack would be to return home and resume solid training in preparation for February’s schedule. The next few weeks of SuperTour races hold six distance efforts and only one sprint qualifier, so the schedule is not in my favor even in the best of seasons. Combine that fact with the possibility of a mono relapse should I over-extend myself, and it became easy to buy the ticket sending us homeward-bound. While I’m disappointed not to ride the wave of confidence I have following my skate sprint result, I do know that I will gain a lot being at home and training for a few weeks. 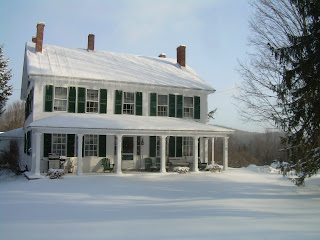 Buena Vista: My convalescence home for the past four days
The next races on my plan are on the first weekend of February, a NorAm mini-tour in Kelowna, BC. Off to catch a plane…