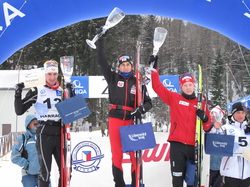 So this last weekend, We had two competitions in Harrachov, Czech Republic. I was excited coming in after skiing well in Seefeld.

The first day was a very good day for me, as I jump better than I had most of the season. I started 13th one minute and six seconds behind the leader. I was confident that I could reach the podium that, but didn’t realize how much harder it was going to be than I thought. It was not until the last lap that I caught 2nd and 3rd place. I knew that I was skiing better than them but I wasn’t sure If they were saving up for a sprint or were going to break away right away. So I decided to hang on the back instead of go and push the pace. On the last little hill about .5k from the finish I was able to put in a little bit of a gap that would allow me to get second place. It was a good day but I knew I could improve on the result and try and grab the top step! 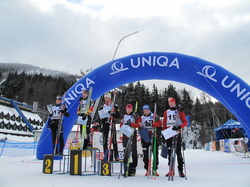 The Second day was a little bit harder for me. The jumping in the morning was tough due to some tail wind. When its tail wind that means the wind is coming from your back and kind of pulls you down instead of lifting you up like head wind. I personally though I had a pretty good jump. It was shorter than the first day but so was everyone else. Instead of starting at 1:06 I started at 1:00. I knew that i would be contending for the podium again but wasn’t so sure if I would be able to get on. After the 2nd lap I had Caught on to a pack of skiers that was right behind the lead pack. So I move up to the front knowing if I stay in the back it was possible for me to get skied of the back if I wasn’t paying attention. Going up the large hill on the last lap I tried to make a move on a flat section before the downhill.  I was able to get a gap but it was closed up as we started going up the next hill and I started to lose ground on the 1st and 2nd place. After fighting back and catching up to them I lost in sprint for 1st and ended up in 3rd place.

With two podiums this weekend I am extremely happy with my level of skiing at the moment. The best thing is I know it is going to get better with the more I train and have fun!

Colorado Buffaloes Pull Ahead For Win At Soldier Hollow