Once again many thanks to Jan at WorldOfXC.com for providing the sprint split data. Clearly we need to begin with the women this week: 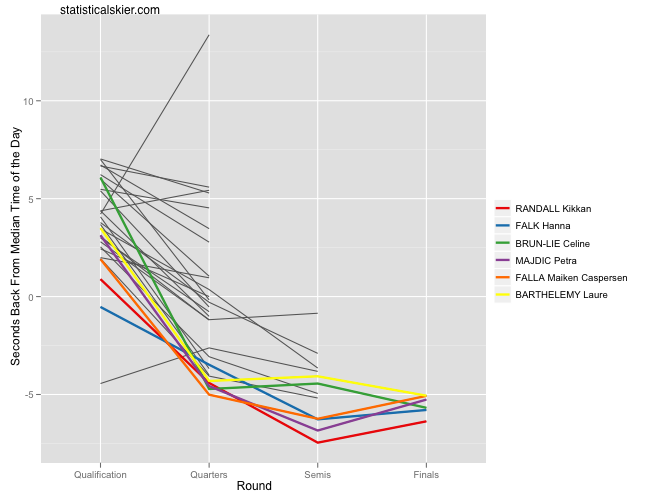 For some reason the qualification round times seem a fair bit slower than many of the times from the rest of the day. I’ve noticed that the women’s heats do tend to get slightly faster as the day goes on, but this is rather extreme. I wonder if the weather or snow conditions played a role.

The women’s field almost seems split into two distinct groups looking at this one race: the folks who’s quarterfinal times barely made it down to the median and everyone else. Marit Björgen stands out with her insanely fast qualification time. What’s of interes to me here is that this qualification effort seems dominant compared to everyone else just in that round, but it became clear as the day progressed that many other skiers were capable of skiing the course roughly that fast, or even faster. (Of course, it’s still possible the conditions sped up as the day went on.) By all reports Björgen missed advancing due to some contact and tactical issues rather than being beat on fitness, so I don’t see much reason to think that her fast qualification time hurt her.

The big story on this side of the pond, of course, is Kikkan Randall. An impressive win, mostly I think because of how unsurprising it is at this point. The way she’s been skiing in the freestyle sprints, when Björgen failed to advance you had to think that Randall liked her chances. It’s nice to have a North American skier to follow for whom reaching the podium is becoming an expected outcome rather than a hoped for outcome if everything goes right.

Here’s a look at the women broken down by semifinal: 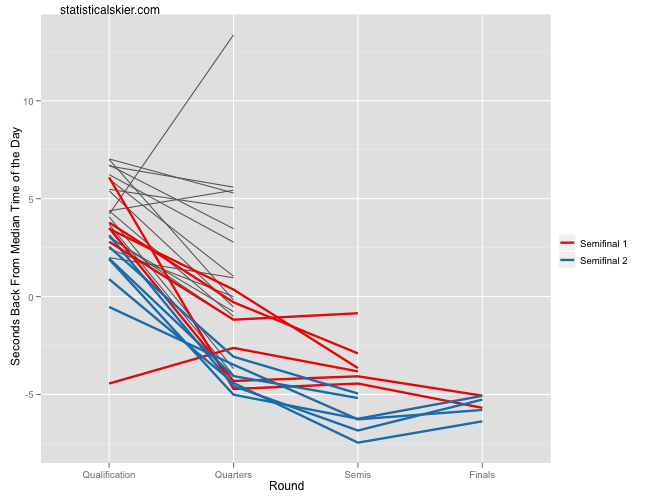 I’m going to attempt a discussion of the men’s race, but there are problems. Sadly, the live timing data source had some “issues” with a few of the quarterfinal times. The quarterfinal times for Matias Strandvall, Federico Pellegrino, Johan Kjoelstad, Alexei Petukhov, Jesper Modin and Calle Halfvarsson we obviously wrong, being nearly 20 seconds faster than basically everyone else’s on the day. This make me suspect what else might be wrong, but I couldn’t find anything clearly messed up aside from those six times.

What I’ve done is sacrilege for a statistician: I “made up” sensible times. Specifically I gave them each quarterfinal times that preserved the correct order within each quarterfinal but placed them no more than 0.5-1.0 seconds ahead of the “known” times. I feel dirty just writing this. But I finally decided that since nothing truly important is riding on me getting this data right, it’s not big deal. So here’s the men race focusing on the people in the final (which you can watch here): 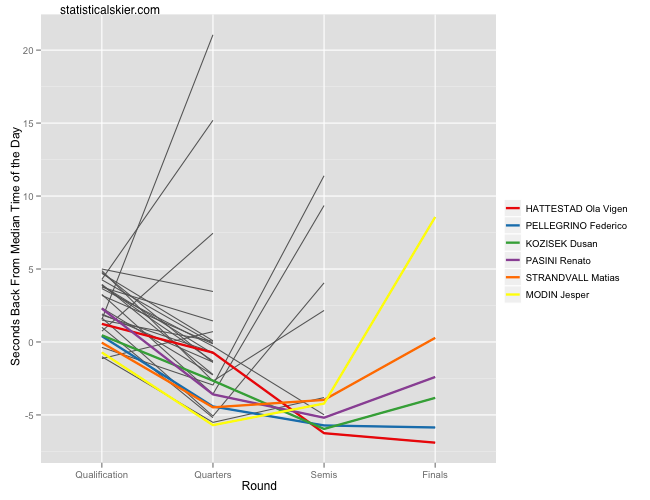 Again, keep in mind that several of these quarterfinal times are likely off by around a second. Even so, we can see that Jesper Modin didn’t quite have the legs for the final (I think he was pushed off the back on a climb ~2 minutes in or so). Also, with Hattestad and Pellegrino stringing out the final over the last few hundred meters we ended up with some sizable gaps between each skier. This makes them look slower in the final then they might otherwise have been, since they will often let up if it’s clear they aren’t going to be sprinting to overtake or hold off anyone.

And here’s a look at the race broken down by semifinals: 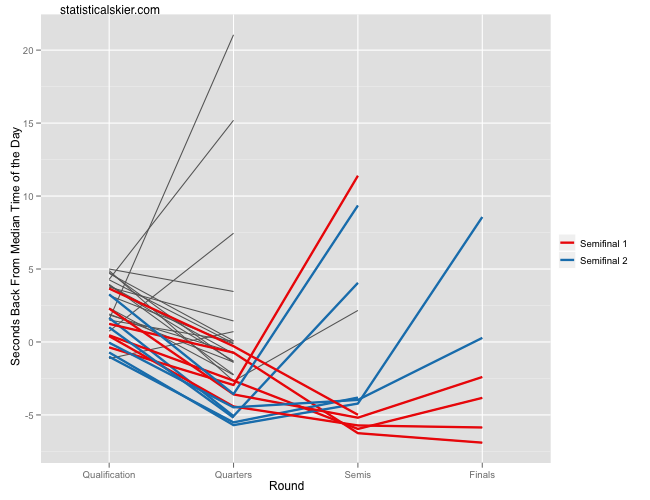 Again, don’t forget that six of those quarterfinal times are likely wrong; perhaps not by much, but still. Caveat emptor.