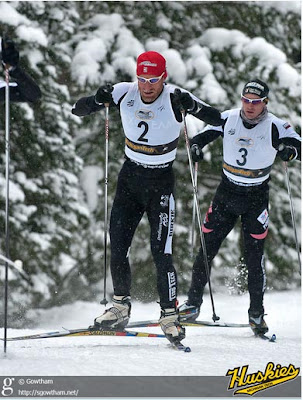 Photo Credit: Gowtham [Michigan Tech]
The last two weeks have been a bit of a struggle for me. I travel well, but I hit the training hard on Monday after flying in from Lake Placid and I caught a virus. I took it real easy most of the week and started feeling better near the weekend.
Last year, I won my first individual SuperTour at the Mayor’s Challenge in Minneapolis, MN but this year I didn’t even get out of bed for the first day of racing. Feeling better on Day 2 I raced but when the pace picked up, I started hurting in a hurry. My results matched how I felt and I began to focus on the coming races in Houghton, MI.
The first two races in Houghton were decent races for me as far as time/percentage back from the leaders but my placings were some of my worst of the season 14th and 11th. I was really starting to loose confidence.
The good thing about tough or poor races is that they make the good ones all that sweeter. Today’s race, a 15km Freestyle mass start was just that. I went out hard from the gun to keep the crashes and chaos to a minimum and settled in for a good pack race. My friend and teammate Matt took some long pulls at the front and brought the lead pack down to ten skiers. Knowing that I was still not back to my 100 percent form I skied a conservative race, trying to use as little energy as possible. With 2.5km to go my roommate Garrott had broken away by 15 seconds from me and a group of four other skiers. I waited for the anticipated attacks of the other skiers in my group and decided to make a break for it as soon as their pace seemed to back off a bit. I was able to get a few meters gap and come in to the finish in second place for the day.
It feels great to be back on the podium and back in the mix at the front of the race.