Just before 9:30 a.m., his athlete Kikkan Randall won a World Cup sprint race in the Czech Republic. And by 10:30, his team had already racked up win number two, as Holly Brooks skied to a dominating victory in the 10 k freestyle SuperTour in Lake Placid.

Brooks said she learned of Randall’s victory moments before starting her own race, and harnessed that energy on her way to a shellacking of the women’s field.

“I’m pretty fired up,” she said. “I found out like five minutes before I came out here, so it was a pretty good distraction…I was thinking about that out on course.”

Kate Fitzgerald (APU) was second, with XC Oregon’s Evelyn Dong taking her first SuperTour podium of the year, with a third-place finish. But three days after being named to the American team headed to World Championships in Oslo, Brooks was in a league of her own, topping Fitzgerald by 55 seconds, and Dong by 1:34.

“Heading over to Norway—I feel like I theoretically should be able to put time on the domestic field,” Brooks said.

After Friday’s suffer-fest at the Olympic Jumping Complex, which sent the women up and down a lung-busting climb three times, Saturday’s race put athletes to a different type of test.

The five-kilometer loop laid out on the biathlon trails at Mt. Van Hoevenberg didn’t include any big hills. But consequently, it didn’t have many descents, leaving few places for athletes to recover.

“There was no rest,” Fitzgerald said. “You had to work the whole time.”

Brooks dispatched Friday’s course with a ten-second margin over her nearest challenger, but she said that she still preferred the biathlon trails, which were made even more difficult by cold temperatures and a few fresh flakes of snow.

“I love these kinds of races, where it’s just slow and constant work,” she said. “I feel like that’s kind of my best thing—if you’re just at high threshold the whole time.”

It showed, as Brooks powered to a 25-second lead over Fitzgerald by the four-kilometer mark, which widened as the race went on.

With two straight victories this weekend netting her a total of $1,500, Brooks heads home to Alaska on Sunday for a month of training with the APU women, including Randall.

This time last season, Brooks had already been at her peak for a month and a half, which left her at less than her best for racing in February and March. But this season, she and Flora stuck to a heavier training load deeper into the winter, with an eye on Oslo.

“Last year, we came from a position where the goal was to qualify for the Olympics, and so she had to race fast all fall, and have kind of peak form at U.S. Nationals,” Flora said. “This year, since we knew she was going to enter strong and be in the mix, we pointed more of the training toward the championships…She’s held training a little longer, so I think the good racing is on its way.”

Brooks’s calendar for the rest of the winter is beginning to fill out—she said that she would not race again until beginning her campaign in Norway. For Fitzgerald, however, the next few months were less certain.

After collecting her second podium in two races, and her third of the year, Fitzgerald is also flying back to Alaska in the next few days. She had her final chance to compete at the U-23 World Championships last season, so instead of going to Estonia for the next two weeks, she’s heading back to catch up on school at APU.

Fitzgerald said that she’s interested in doing some longer distance races later this year, but is also considering a trip to Europe for domestic-level competition.

“I’m for sure thinking about it—and I’m kind of thinking of seeing how funding will go,” she said. “I’m…not really a planner. If a door opens, then I’ll go for it.”

Dong, in third, said she had no idea that she was in the mix for the podium. With few club coaches remaining in the east after last week’s U.S. National Championships in Rumford, ME, most splits were going to the athletes racing in the college carnival.

Dong said she felt “a little tired” on Saturday, and it’s clear that some of the other women did, too—many of them had raced six times in the last two weeks, between the competitions in Maine and Lake Placid.

Dong now heads home to Oregon, with many other top athletes also piling into buses and cars to travel following Saturday’s competitions. The SuperTour continues next weekend in Minneapolis, Minnesota with the Midwest Grand Prix. The CXC Team Vertical Limit will be out in force at that event, but many of the remaining top women will be elsewhere—Brooks, Fitzgerald and Smyth training in Alaska, and top junior and U-23 athletes racing in Estonia. 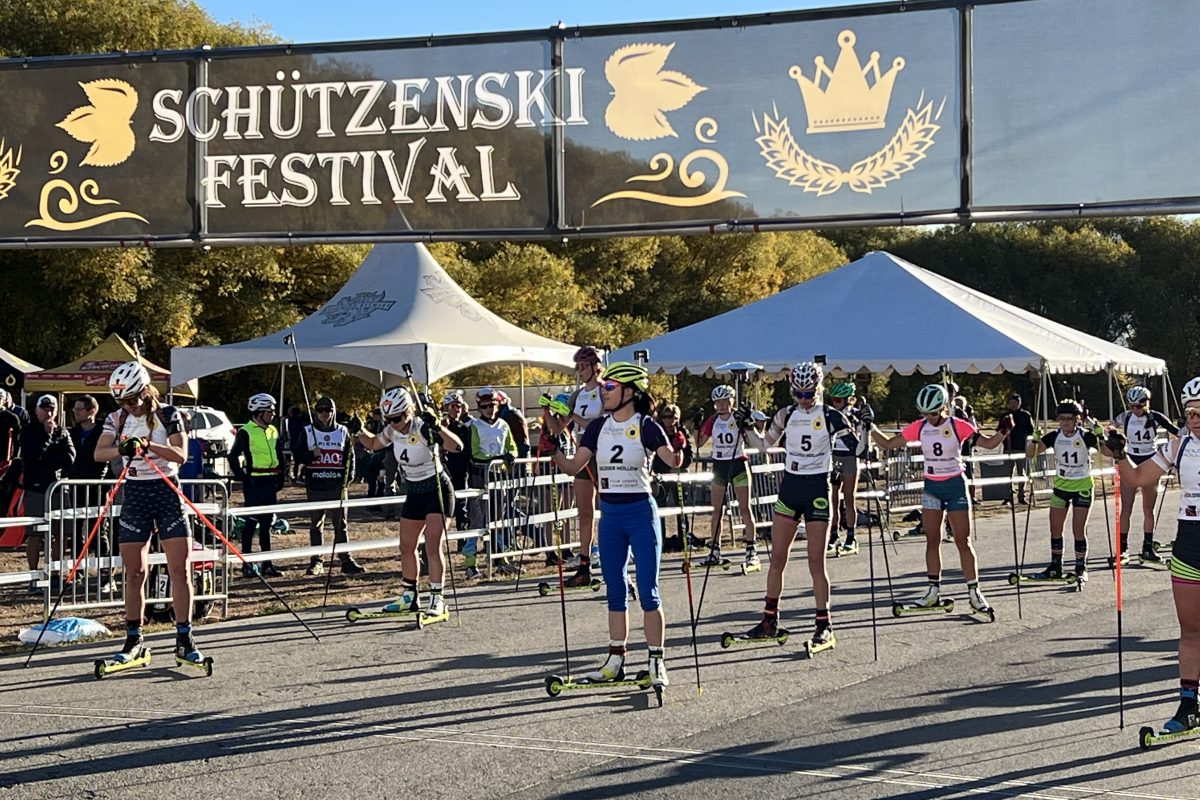